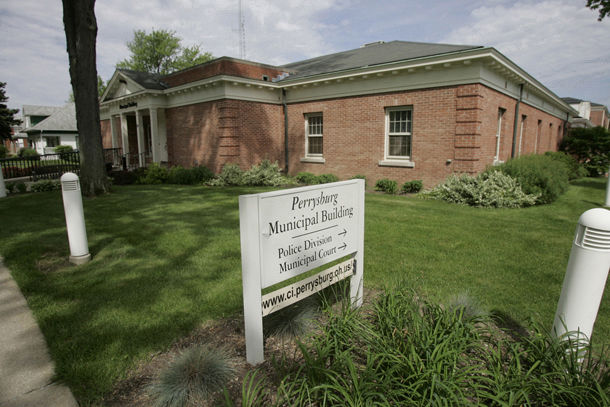 PERRYSBURG — Alternate options for the road design of the entrance for the planned Starbucks Coffee on
Eckel Junction Road were presented at the March 16 council meeting.
Dave Kinzel, owner of the Shoppes at Riverplace, which has been located on Eckel Junction Road and Ohio
25 for 31 years, presented a private traffic study that shows the current entrance design will cause
back-ups on both roads.
The current design will allow for a left turn in and out of the Starbucks parking lot onto Eckel
Junction. Kinzel wants it to be only a right-turn entrance and right-turn exit.
The site plans went through the planning commission, which is the regular process. They do not normally
go through city council.
During that process there were no appeals filed within allowable timelines. Having missed the deadlines
Kinzel is presenting what he considers potential options to council.
Kinzel considers the traffic at that intersection to already be congested.
“This takes a bad situation and makes it considerably worse,” he said.
As part of his presentation Kinzel presented evidence that showed Starbucks locations generate more
traffic than the average coffee shop.
Kinzel believes that the director of public safety and city council have the power to make traffic
recommendations.
While no actions were taken at the full council meeting, the subject was referred to the service
committee.
Kinzel said he would also attend the next meeting. That meeting will take place on April 28 at 5:30 p.m.

In other business, the council went into executive session, from which Born was recused herself, for
potential conflict of interest.
Upon return there was a vote to settle out of court on an appeal filed in the 6th District Court of
Appeals by Perrysburg Heritage LLC against the City of Perrysburg. The Wood County Court of Common Pleas
had upheld the council denial of a stockade fence at 401 W. Front St. Details of the settlement were not
made public.
Born abstained from voting on the resolution, for potential conflict of interest, and it passed 6-0.
From the finance committee an ordinance was approved that amended appropriations for current expenses to
the budget. The vote was 6-1, without discussion, and Councilwoman Deborah Born voting against.
In an interview after the meeting Born said there are several discrepancies with the line items in the
2021 budget.
“The focus is on superficial spending, not genuine issues. Two items stuck out to me State Route 199
water tower tank rehab and paint for $1 million and the State Route 199 tank refurbishment of the water
tower. That sounds like an expensive paint job — a total of $1.9 million to refurbish a water tower. I
think we should be spending the money on fundamentals and not masking the problems with a million dollar
paint job. I’m also against the unnecessary spending on tar multi-use paths that cause the destruction
of valuable green space on our riverfront,” Born said.
Eight ordinances were approved by council, all unanimously, which dealt with the city personnel code.
“That particular section relates to employment with the city and through our various collective
bargaining agreements and the employee handbook, which we revised last year and into this year. Some of
those provisions are now covered by those agreements and the handbook, so there are no reasons for them
to be codified ordinances anymore. What it will do is that going forward, if we update our handbook and
contracts with the labor organizations, then we won’t need those ordinances. So, it’s housekeeping
provisions,” said Council President Cory Kuhlman.
More revisions are expected by Kuhlman down the road.
“I think our law director’s doing a great job trying to clean things up, so we don’t have any conflicting
language anywhere or the potential of conflicts,” Kuhlman said.