BERLIN (AP) — Stefan Geismeier gingerly dusted the head of the ancient Mesopotamian figure in Berlin’s
famous Pergamon Museum, then checked to make sure the statue was firmly anchored on its pedestal before
moving on to the next object in the vast, empty building.
As the stone restoration specialist went about his work, other employees pasted arrows on the ground to
mark the special paths visitors must follow when the museum finally reopens Tuesday under strict
conditions.
Museums throughout Germany closed at the beginning of November as coronavirus cases increased, but
authorities earlier this month eased restrictions to allow some museums, galleries and certain other
cultural venues to begin receiving visitors again.
Some cities, including Cologne, began last week and now the capital is following suit and reopening some
of the collections on Berlin’s Museum Island — one of the city’s cultural highlights and a UNESCO World
Heritage site — and other venues to visitors.
"Nobody knows exactly if and when the virus numbers will go up again, but for now we will
open," said Markus Farr, a spokesman for Berlin’s state museums.
Under new regulations, museums in areas with fewer than 50 new infections weekly per 100,000 residents
can open without major restrictions other than standard mask, hygiene and distancing rules.
When the rate is between 50 and 100 — as it is in Berlin, which is currently at 75.1 — tickets are being
limited to online purchase and restricted in numbers.
If the figure rises above 100 for three consecutive days, museums must close again.
Under the Berlin plan, after buying their tickets online, visitors must register their names as they
enter the buildings. Only one visitor per 40 square meters is being allowed inside, and everyone needs
to wear masks and adhere to standard hygiene and distancing rules.
On Tuesday the national infection rate was at 83.7 infections weekly per 100,000 residents and an
expected further rise of the numbers in Berlin and most parts of Germany may soon force museums to close
their doors again.
In addition to the Pergamon and its Museum of the Ancient Near East where Geismeier cleaned the head of
Puzur-Ishtar, the ruler of the city of Mari, on Monday, other facilities reopening in Berlin include the
Alte Nationalgalerie, the James Simon Gallery, and the Neues Museum.
Other cultural venues are also moving ahead with plans to reopen — to the delight of many.
After the Berlin Philharmonic announced last week that it would open for one concert later this month,
online tickets were sold out "within minutes," a spokesperson told German news agency dpa.
The Philharmonic wants to allow up to 1,000 visitors in for a symphony concert under star conductor
Kirill Petrenko on Saturday, while Daniel Barenboim will conduct Le nozze di Figaro at the Berlin State
Opera on Unter den Linden boulevard on April 2.
The concerts are part of a pilot project including nine shows at the city’s Volksbuehne and Berliner
Ensemble theaters, the State Opera and other venues from March 19 to April 4.
All visitors, as well as actors, musicians and other workers, must test for the virus on the day of the
event at specifically chosen test centers and show evidence of a negative result when they present their
ID and personalized ticket for entry.
"Such a pilot project is unique in Germany," said Klaus Lederer the city state’s senator for
culture. "Hopefully, it’s a contribution with a view toward untroubled visits to cultural events
again — as quickly as possible." 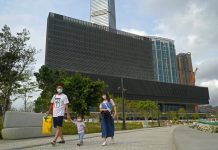