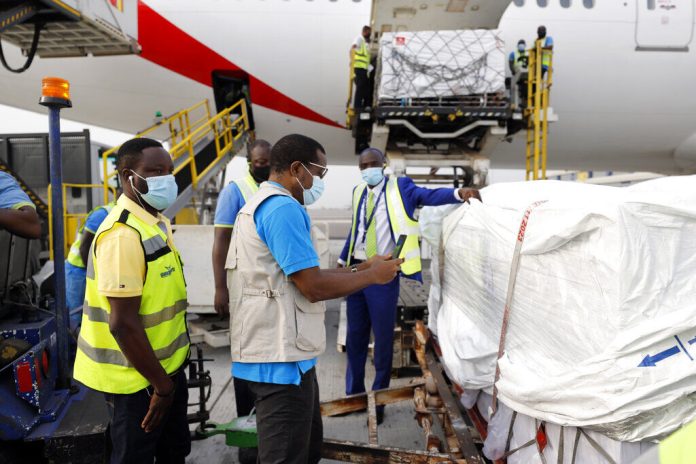 ACCRA, Ghana (AP) — Ghana received the world’s first delivery of coronavirus vaccines from the United
Nations-backed COVAX initiative on Wednesday — the long-awaited start for a program that has thus far
fallen short of hopes that it would ensure shots were given quickly to the world’s most vulnerable
people.
The arrival of 600,000 doses of the AstraZeneca vaccine in the West African country marks the beginning
of the largest vaccine procurement and supply operation in history, according to the World Health
Organization and UNICEF. It is a linchpin of efforts to bring the pandemic to an end and has been hailed
as the first time the world has delivered a highly sought-after vaccine to poor countries during an
ongoing outbreak.
"Today marks the historic moment for which we have been planning and working so hard. With the first
shipment of doses, we can make good on the promise of the COVAX facility to ensure people from less
wealthy countries are not left behind in the race for life-saving vaccines," said Henrietta Fore,
executive director of UNICEF, which delivered the vaccines.
But the initiative, formed to ensure fair access to vaccines by low- and middle-income countries, has
been hampered by the severely limited global supply of doses and logistical problems. Although it aims
to deliver 2 billion shots this year, it currently has legally binding agreements only for several
hundred million shots.
It already missed its own goal of beginning vaccinations in poor countries at the same time immunizations
were rolled out in rich ones. The overall campaign thus far has been extremely uneven: 80% of the 210
million doses administered worldwide thus far were given in just 10 countries, WHO Director-General
Tedros Adhanom Ghebreyesus said this week.
That delay led numerous poorer countries to rush to sign their own deals, potentially undermining COVAX’s
efforts to get shots to the neediest people.
And some countries can’t afford to go it alone.
Ghana is among 92 countries that will receive vaccines for free through the initiative, which is led by
the WHO; Gavi, a vaccine group; and the Coalition for Epidemic Preparedness Innovations. Another 90
countries and eight territories have agreed to pay.
Ghana, a nation of 30 million people that has recorded 81,245 cases and 584 deaths since the beginning of
the pandemic, plans to begin vaccinations on March 2. Neighboring Ivory Coast will be the next to
receive vaccines, and also will roll them out starting next week.
Even as it celebrated receiving the first doses, Ghana noted the long road ahead.
"The government of Ghana remains resolute at ensuring the welfare of all Ghanaians and is making
frantic efforts to acquire adequate vaccines to cover the entire population through bilateral and
multilateral agencies," Ghana’s acting minister of information, Kojo Oppong Nkrumah, said in a
statement.
That freneticism has been echoed across the continent of 1.3 billion people, as deliveries have fallen
behind schedule and African nations have scrambled to secure vaccines from various sources. Only about
seven of 54 have begun vaccination campaigns.
"If you look at which countries have managed to secure vaccines for their citizens, they are all in
the developed industrialized world. And we are happy for their citizens. But we also want everyone who
needs to be protected against the pandemic to get the vaccine," UNICEF’s regional director for West
and Central Africa, Marie-Pierre Poirier, told The Associated Press, calling the deliveries to Ghana a
historic moment. "This is critical to put an end to the pandemic, because until everybody is safe,
no one is safe."
The target for 2021 is 1.3 billion doses in the 92 countries, and up to 2 billion taking into
consideration the other countries, she said.
While 20% of the most vulnerable population being vaccinated is the current goal, she said the hope is
that this is significantly increased.
"I think that more actors, once they feel a little bit reassured about their own population, would
for sure come and help so we can catch up," she said.
Some activists have also expressed serious concern about the COVAX initiative’s goal of only giving
enough shots to cover about 20% to 30% of the population in countries that receive donated doses. They
have warned that even if the program is successful in distributing those vaccines, those countries will
remain vulnerable to continued coronavirus outbreaks since most experts guess that at least 70% of
people will need protection from the virus to reach herd immunity.
And experts have noted that even if richer countries reach some level of herd immunity, everyone will
remain vulnerable as long as there are pockets of COVID-19 anywhere in the world.
"We will not end the pandemic anywhere unless we end it everywhere," said Tedros, the WHO
leader. "Today is a major first step towards realizing our shared vision of vaccine equity, but
it’s just the beginning. We still have a lot of work to do with governments and manufacturers to ensure
that vaccination of health workers and older people is underway in all countries within the first 100
days of this year."
The vaccines delivered Wednesday are the first of some about 7 million doses being produced by the Serum
Institute in India for some 20 countries, according to the Africa Centres for Disease Control and
Prevention.
"Over the coming weeks, COVAX must deliver vaccines to all participating economies to ensure that
those most at risk are protected, wherever they live," said Dr Seth Berkley, CEO of Gavi. "We
need governments and businesses now to recommit their support for COVAX and help us defeat this virus as
quickly as possible."
___
Petesch reported from Dakar, Senegal. Associated Press writers Maria Cheng in Toronto and Jamey Keaten in
Geneva contributed.
___
Follow all of AP’s pandemic coverage at: https://apnews.com/hub/coronavirus-pandemic,
https://apnews.com/hub/coronavirus-vaccine and https://apnews.com/UnderstandingtheOutbreak.