Most regular visitors to the Wood County Historical Center and Museum are aware of the cemetery on the
grounds. It is officially known as the Wood County Paupers’ Cemetery.
On Saturday, those buried in that cemetery will be honored with a special monument dedication which will
be installed at the entrance to the cemetery. That monument will contain the names of 252 individuals
who are confirmed to have been buried there.
Curator Holly Hartlerode said that one of the volunteers, Millie Broka, did extensive research through
various records including archived obituaries to confirm those who are buried on the grounds.
“There may be more than those 252,” Hartlerode said, “But those are the ones that we have absolutely
confirmed.” 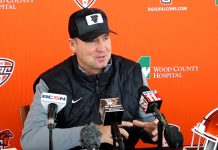