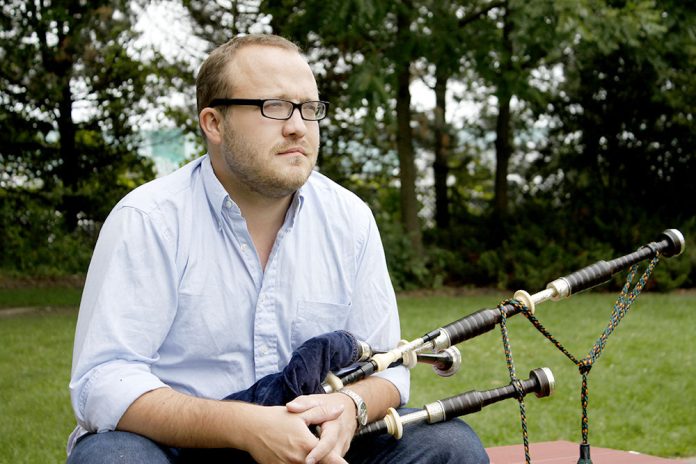 PERRYSBURG — Andrew Bova, a 2007 graduate of Perrysburg High School, will come home for bagpipe concert
for the community on Thursday.
The concert will be held in the Beck Auditorium at the Commodore Building, 140 E. Indiana Ave., and will
begin at 6 p.m. It is free and open to the public.
Bova began playing the bagpipes at age 12. After graduating from Perrysburg High School in 2007, where he
was active in various performing arts groups, he went on to complete a Bachelor of Fine Arts degree and
a Master of Music degree, both in piping, from Carnegie Mellon University.
He currently resides in Glasgow where he is pursuing a PhD at The Royal Conservatoire of Scotland,
researching competitive piping from 1947 to 2015. Bova has been a consistently successful solo
competitor in the professional grades, competing in the U.S., Canada and Scotland.
In addition to his solo career, Bova is an avid bandsman with a varied history in pipe bands, having
served as the pipe sergeant of the Carnegie Mellon University Pipes and Drums and also having been a
member of numerous top-grade bands. He currently plays with Shotts and Dykehead Caledonia Pipe Band in
Scotland, and as a part of this band he won the World Pipe Band Championships in 2015.
In addition to his own playing and research, Bova helps in various teaching aspects within the Royal
Conservatoire of Scotland’s undergraduate degree courses in traditional music and piping, regularly
features as a recitalist and instructor at piping workshops in Europe, is a regular contributor to
Piping Today Magazine and works part time at the National Piping Centre in Glasgow.
Bova will also be spending time with students at Frank Elementary, where he attended school while growing
up in Perrysburg.
“Andrew is a great example of the impact that early arts introduction can have,” said Superintendent Tom
Hosler. “We are proud of him and thankful that he is willing to showcase and share his talents in this
way with the community and our students. We know that there are several students like Andrew in our
ranks today and many more who may never become professional artists, but the skills and discipline they
learn through the arts are important in whatever the future holds for them. It will be fantastic for
them to meet and hear from him.”

Investor pulls out of Woodstock 50, leaving fest in shambles