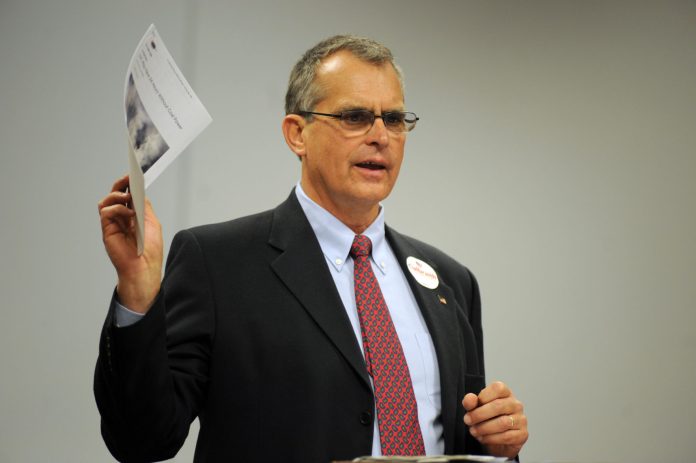 Michael Galbraith introduced his Congressional candidacy for the 5th District seat with a town hall
meeting at the Wood County District Public Library. For about 90 minutes Tuesday, Galbraith took
questions that ran the gamut of political issues.
“This meeting is really a listening session,” Galbraith said. “Any representative of the people should be
listening to the people and it’s their voice that I’m looking to hear this evening.”
Galbraith, a Democrat, is challenging U.S. Rep. Bob Latta, R-Bowling Green, for the seat Latta has held
since 2007.
The Galbraith campaign also presented a list of general issues that could be chosen, complete with the
open-ended question, “Is there anything you’d like to share with Michael about these issues?”
Attendees took advantage of the opportunity, with many questionnaires filled out and others used as the
starting point for the question and answer session.
“On Monday, Nov. 7, if anybody had told me I would be running for Congress, I would have told them that
they were crazy. I had not given it any consideration,” Galbraith said. “It was not until I heard Barack
Obama’s farewell speech, telling me to grab a clipboard, get some signatures and run for office, that I
knew what I had to do,” Galbraith said.
He started with his personal history, noting that he is a Democrat who has never held public office.
However, he said he isn’t completely new to the world of politics. His father, John Galbraith,
represented the Western Lucas County and Fulton County areas, as a Republican, when he served in the
Ohio Legislature from 1967 to 1986. Michael Galbraith went to Maumee Valley Country Day School and then
Bucknell University, where he got a degree in economics. He has since had a lifetime career in finance.
Much of his career was spent in Europe, living mostly in London. He currently teaches in the finance
department at Bowling Green State University and runs his own small investment management business.
Galbraith quickly began answering questions posed by the audience. The first question was posed by Dinah
Vincent, who asked, “The elephant in the room is climate change. … What are we to do?”
“There’s the whole issue of the Nexus pipeline,” Galbraith said. “On the surface, there’s natural gas,
which sounds like a clean energy source, but it’s a fossil fuel. It’s not a clean fuel. I think we
should be striving to develop cleaner forms of energy.
“We have wind energy. We have solar energy. We have geothermal energy,” Galbraith said. “In this country
we have to get away from the heavy influence that the oil companies have and promote alternative energy,
and there are a number jobs to be had there.
“I must admit, I enjoy driving around in my Jeep, but if I had the choice I would drive an electric
Jeep,” he said.
Another listener brought up the issue of mass transportation. Galbraith pointed out that there is no
public transportation going from Bowling Green, or any of the surrounding towns, to Toledo. He compared
this situation to that of Europe, which has a highly developed rail system.
“Quicken Loans has taken upon themselves to rejuvenate Detroit. They have installed light rail, which
could transport people back and forth. Detroit was in far worse shape than Toledo. There is a certain
amount of rejuvenation going on.”
Several listeners brought up the Affordable Care Act and the Republican efforts to repeal it, which
Galbraith said he believed to be a mistake. He is a fan of the European health care systems, which he
credits with saving his life at one point, as well as delivering two of his children, with no question
as to cost. Further, he pointed out how corporations also benefit, because they do not have to buy
health care for their employees.
He also related how he believes the opioid epidemic relates to the ACA.
“Ohio leads the country in opioid deaths. This is ahead of California and New York. … It’s awful that
Ohio should lead the pack. Certainly opioid addiction is one concern,” Galbraith said. “If Ohio loses
its Medicaid expansion, then not only will hospitals and medical facilities have to close, drug
treatment facilities will have to close as well. How are these people going to get back on their feet if
they can’t get treatment? … That will also cost jobs. Good jobs. With 200,000 people (in Ohio), and an
untold number of children being affected by this epidemic, it’s just tragic.”
When birth control was brought up, Galbraith pointed out the many different ways that Planned Parenthood
is used by millions of Americans and that he simply opposed the direction of the Trump administration on
the issue.
Galbraith’s town hall was unrehearsed and off the cuff, which he self-deprecatingly admitted, often
moving on with freely admitted speculation. Many more questions were answered, most also with the
recognition that his solutions would be part of much larger debate, and would have to be negotiated with
his fellow representatives. At one point he said, “One thought did cross my mind, to call up the most
right wing, Tea Party person from West Texas, and ask him out to lunch. The point being that this is how
we begin to work together.”