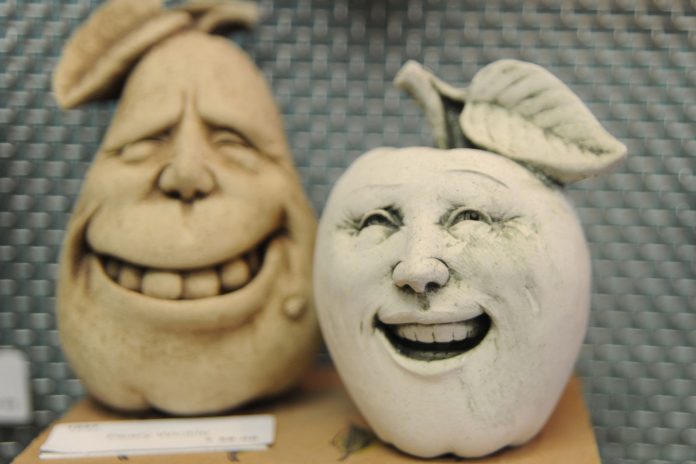 WATERVILLE — Whimsical and quirky art is the signature trademark of a George Carruth garden art piece.
There is a certain frivolity in many of his garden pieces, yet his poignant art also has been known to
touch the hearts of those with even a stony temperament.
Carruth and his wife operate the Garden Smiles shop at 211 Mechanic St. in Waterville, which features his
art and more. The store was a natural outgrowth of Carruth Studio, where the stone carver creates his
distinctive art.
“I started carving in 1983,” Carruth said.
His original art involved one-of-a-kind pieces that he hand carved. After that success, he found his
niche by now casting multiple molds and creating mass-produced, more affordable artwork. His art is
shipped wholesale to garden centers and other shops across the country. Carruth’s art is widely
available in Northwest Ohio.
His wife, Deb Carruth, who handles the business of running the shop, brags about her husband.
“In the businesses, George is very well respected for what he has achieved in cast stone. I am truly very
proud of him.”
His feelings are mutual.
“I want to stress Debbie and I have done this together. She works just as hard as I do. I’m kind of a
hermit; I do not like doing shows, but she delights in telling our story. We are a great duo,” George
Carruth said.
Deb Carruth is selective in choosing other artists’ pieces to display and sell at their store, .
“My goal was to bring in art from other people to complement George’s work. I want to highlight his work
but also showcase other primarily American-made pieces with just a few imports,” she said.
In addition to the store, the artist’s studio is in an adjacent house where he can work in private. The
Carruths also still operate the original studio on Farnsworth Road, which now serves as the
manufacturing facility.
His art was originally created as garden art. Over the years, more pieces are finding their way indoors,
and much of the artwork now focuses on holidays as well as memorial tributes.
“The sympathy world has become huge. We now sell a lot of pieces for sympathy,” Deb Carruth said.
The artist got his start working as a sculptor for American Greetings.
“I was the guy that did the first 60 Care Bear characters,” George Carruth said.
He said he sculpted out of clay at American Greetings but found a new medium intriguing.
“This stone fascinated me,” he said.
He used Berea sandstone, which he says is very tight and carvable. He noted he discovered it as fishermen
would carve their names into the sandstone break walls in Berea.
“It was very impressive to be walking along that stone break wall. I started carving little faces in the
stone. That’s how I started carving stone, and I loved it,” he said.
After creating some pieces at home, Deb Carruth looked at them and said, “We could sell those.”
The two Perrysburg natives signed up to show at Harrison Rally Day in Perrysburg in the early 1980s.
“People bought everything we had,” George Carruth said.
He left his corporate job in 1983, and Garden Smiles got its roots.
“We started entering every show. We were passionate about selling these things,” he recalled.
When he ventured away from one-of-a-kind stones, he developed a garden catalog and began casting the art
in concrete
“I loved the English Garden wall plaques. They are easy to cast and easy to ship. People could, instead
of paying $300 for one-of-a kind, hand-carved stones, they could have my art at a more affordable
price.”
His art is often inspired by books that feature children’s illustrations.
“I take my work very seriously but these are very light-hearted images,” George Carruth said. “They make
me smile and they make everybody else smile. I love the way they are used as subtle accents.”
All of his pieces have names that are designed to be funny.
“The names make people laugh, as well as the art,” Deb Carruth said.
The artist estimates they have retired about 300 of the pieces as new ones are added each year to the
catalog to keep the inventory fresh and new.
“The new plaques drive our sales. People want a new face or a new frog, and that’s OK with me because I
love doing them,” he said.
Among his favorite works are “Two Peas in a Pod” and “Too Much Fun.” He describes the latter as a design
with a green man face with leaves.
“He’s got his fingers in his mouth making a funny face. He’s funny looking and yet has a classic look at
the same time.”
Carruth himself will sometimes walk through the store observing customers, watching them and listening as
they search for the perfect gift for a family member or friend.
“They come to our store and find the perfect gift for the recipient. That’s what makes me happy. I stay
in the background and I love to hear them say, ‘That’s the perfect gift.’”