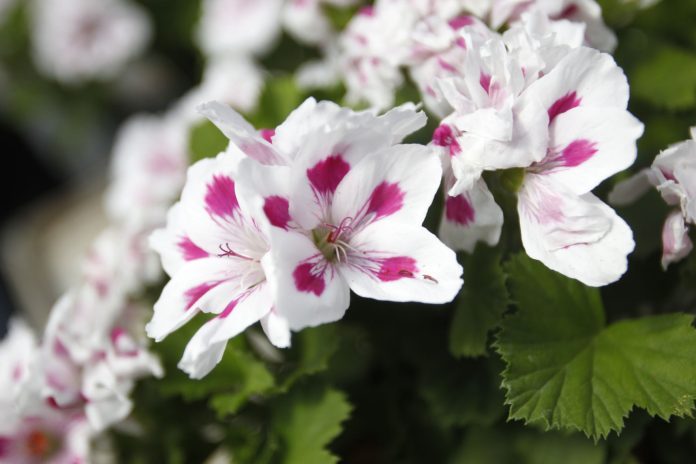 Royalty has arrived at Bostdorff Greenhouse in the form of Regal Geraniums.
Denise Timm asked, “Aren’t they beautiful?”
The owner, along with her husband, Eric, said she is very proud of the three varieties of geraniums that
are in full bloom at their facility at 18862 N. Dixie Highway.
She cautions they won’t have them long. Last year they sold out of the premium plant, which sells for a
higher price than standard geraniums.
Bostdorff’s offers three varieties, Royalty White; Elegance Imperial and Elegance Ballet.
Timm said she wanted to be sure and get the flowers this year but was initially told the company had sold
out of those that would normally be shipped to this region. She persisted and got an early shipment,
which is why they are already here and in full bloom.
“We have fewer this year than last but I told them I would take what I could get,” she said. “We can’t
propagate them. These will be gone pretty quick. It is a rich and beautiful plant.”
The Regal is trademarked as it is exclusive to the one grower.
She indicated it is one of the more unique plants and a popular choice.
They are what is called a full summer plant, which prefers part sun and part shade. Timm says they will
bloom starting in the spring and throughout the summer.
Should geraniums not be your preference, Timm said they also are trying to expand their “more trendy”
lines of garden plants. For example, this year they are stocking the Rex Begonia, which is a different
type of begonia that does not flower. Its attraction are the leaves, which are showy and similar to a
coleus in variegation and patterns of leaves.
“It’s beautiful and very exotic,” Timm said. “We’re real excited this year about some of our offerings.”

They also have a very limited supply of ranunculus, which is growing in popularity. The unusual flower is
small but showy. The greenhouse has the Asiatics in a mix of colors. Another special plant is the
helianthus, which Timm says looks like a small or miniature sunflower.
Eric Timm also created popular wood planters made of scrap pallet wood, which are selling well at the
greenhouse.
His wife said that repurposed wood is very popular this year.