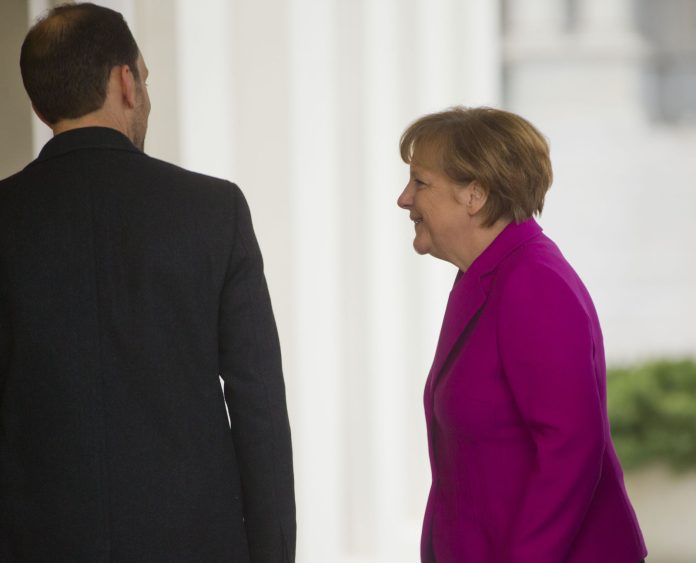 WASHINGTON (AP) — Amid a swirl of diplomatic maneuvering, President Barack Obama and German Chancellor
Angela Merkel huddled at the White House Monday to evaluate the prospects of reviving an elusive peace
plan to end the conflict between Ukraine and pro-Russian separatists.

Hanging over the discussions was a potential split between Obama and Merkel on sending Ukraine defensive
weapons to wage a more effective fight against the rebels. The White House has said Obama is
reconsidering his opposition to arming Ukraine given a recent surge in violence, while Merkel has
adamantly opposed such steps.

The U.S. and Europe have largely been in lockstep in their response to the conflict between Russia and
Ukraine, raising the prospect that the public divide on lethal aid was merely a tactic to push Russian
President Vladimir Putin to accept a peace plan.

Merkel and French President Francois Hollande met with Putin and Ukrainian leaders last week and
announced a new summit meeting for Wednesday in Minsk. The United States will not be at the table when
French and German leaders meet with Ukrainian President Petro Poroshenko and Putin in an attempt to
breathe life into a much-violated September peace plan.

The European Union decided Monday to temporarily hold off on slapping more sanctions on Russians and
Ukrainian separatists while awaiting the outcome of the peace talks.

"The principle of the sanctions is maintained but the application will depend on what happens on the
ground," French Foreign Minister Laurent Fabius said during a break in talks with EU foreign
ministers in Brussels.

The meeting in the Belarusian capital takes place with Merkel and Hollande deeply opposed to arming
Ukraine in its bid to push back the separatists that NATO and the United States insist are being armed
by Russia, which also has troops fighting in the eastern Ukraine. The White House has let it be known
that Obama, who had resisted calls to send arms, was now considering doing just that.

Opponents of arming Kiev believe that could open a proxy war between Washington and Moscow. Merkel and
Hollande insist the only way to end the conflict is through diplomacy.

"It must be possible to find — not through military conflict but at the negotiating table — a
balance of interests inside Ukraine that guarantees both the integrity of the state and the appropriate
scale of autonomy" for the separatists, said German Defense Minister Ursula von der Leyen.

Secretary of State John Kerry, on NBC’s "Meet the Press," said that he, too, was working for a
diplomatic solution but was ambiguous on arms for Kiev.

"I have no doubt that additional assistance of economic kind and other kinds will be going to
Ukraine. And we do so understanding that there is no military solution. The solution is a political,
diplomatic one. But President Putin’s got to make the decision to take an off ramp. And we have to make
it clear to him that we are absolutely committed to the sovereignty and integrity of Ukraine no matter
what," he said in response to a direct question about sending arms.

At the Munich Security Conference over the weekend, Vice President Joe Biden stopped short of explicitly
addressing possible arms deliveries. "We will continue to provide Ukraine with security assistance
not to encourage war, but to allow Ukraine to defend itself," he said.

More than 5,300 people have been killed since fighting began in April, according to a U.N. tally, and the
bloodshed has markedly increased over the past two weeks.

On Monday, a powerful explosion rocked a chemical plant and set it on fire outside the separatist
stronghold of Donetsk in eastern Ukraine. Rebels said the plant was hit by government shelling.

On another topic, it remains to be seen whether Merkel will again raise the issue of past National
Security Agency tapping of her phone and the expulsion of Washington’s top spy from Berlin after the
Germans discovered one of its intelligence agents had passed about 200 documents to the CIA. While the
issue has not been a top priority for the German government lately, it continues to bubble along and
casts a cloud over U.S.-German ties, arguably the most important bilateral relationship in NATO.