Spring semester enrollment at Bowling Green State University has held nearly steady compared to a year
ago, university officials said late Wednesday afternoon.
While main campus graduate enrollment is down 225 students, undergraduate enrollment is up 261 students,
resulting in a net gain of 36 students or 0.2 percent. There are 13,663 undergraduate students compared
to 13,402 a year ago, and 2,644 graduate students, compared to 2,869 in January 2010.
At the Firelands campus in Huron, there are 2,405 undergraduate students and no graduate students,
compared to 2,483 undergraduates and two graduate students a year ago.
Dr. Timothy Messer-Kruse, dean of the Graduate School and interim vice provost for academic programs,
said the major decline in graduate students is in the College of Education and Human Development. “It is
my speculation that the reason is economic. A large proportion of the graduate students in that college
are practicing teachers and their attendance has been somewhat supported by their employers. I suspect
that support has declined.”
Messer-Kruse said graduate enrollment in arts and sciences is steady, enrollment is up slightly for the
College of Business Administration and the College of Music and “is significantly up for the College of
Technology.”
Vice President for Enrollment Management Dr. Albert Colom said the enrollment figures “show nothing that
is surprising to us or upsetting. We are prospering quite well. We want to grow this institution
gradually so that the growth is sustainable.”
Looking ahead to fall 2011, Colom is predicting a record freshman class, following the second largest
freshman class of 3,866 students last fall. “I’m shooting for 4,000 freshmen,” he said.
Colom said the expectation is based on the fact that as of this week 22 percent more applications have
been received than a year ago, 15.6 percent more students have been admitted and 761 students have paid
their $200 residence hall deposits. The deposit figure is 113 percent higher than a year ago.
He also noted significant interest in transfer applications.
Colom said the fact that two new residence halls come on line in August, one dedicated to freshmen and
one dedicated to upperclassmen, is helping enrollment. Also in the mix of new buildings are the Stroh
Center, due to host its first event in September, two new dining halls and the Wolfe Center for the
Arts.
Colom said BGSU retained 90 percent of its freshman class. Of the 392 freshment who did not return this
month, he said one-third were the result of academic difficulties and the rest due to financial issues.

“We have been calling and counseling all of these (economic) individuals. We are working with them to
help them find ways to continue their education,” Colom said. 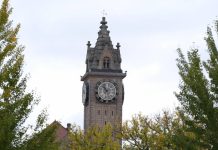