There is a reason why Delta has not given up more than 49 points in any game this year on its way to a 12-2 record — the Panthers’ 2-3 zone defense.

Monday on Bowling Green’s floor, the Bobcats struggled figuring how to score against the Delta’s zone, falling to the Panthers, 45-43, in non-league boys basketball.

It is Delta’s sixth straight win, while the Bobcats have lost three straight. Delta 6-foot-3 senior forward Nolan Risner says the defense has been a work in progress for four years.

“My freshman year I came in, and we had a coach who was in his second year, he played some college ball and played a 2-3 zone there and we’ve been running it four years now. We’ve gotten pretty good at it,” Risner said.

The Panthers start four seniors and one junior, so they are well-bred in the 2-3 zone by now. Only there is one twist — somebody has to guard the opponents’ best player.

That job fell on Risner, who held BG 6-foot-8 senior forward Jabari Conway to three points, holding Conway to two points in the paint, and keeping him to five rebounds.

“We call it ‘Star Roles,’ where we put it on who we think is their best player,” Risner said. “We always have a second guy there, we have me there because he’s always down in the block, and we’ll have our forward always there helping me.”

The Panthers were coming off a 57-43 victory over Northwest Ohio Athletic League foe Archbold on Friday and 55-36 victory over North Baltimore Saturday in a non-league encounter, so this was their third game in four days.

“We only had one day to prepare,” Delta coach Matt Brighton said. “Lucky for me we have kids who are seniors and juniors now who have been in the program, they know what we expect.

“We had one day to go over their stuff, we had kids come in and really buy into stopping a couple of their players. We were able to get some film on them, and having the players buy in and understand that we can come here and win if the defense was like it was tonight.”

As a result, the Bobcats relied on their three-point shooting, making 10 shots from outside the arc, but only six from inside the arc.

BG shot 34% (16-for-47) from the field, made one of three free throws and had 13 turnovers, including six steals by the Panthers.

Yes, BG coach Mason Roth was impressed with Delta’s zone, but he said the Bobcats could have done a better job running their offense.

“They do a good job, they move around, but we didn’t execute very well,” Roth said. “We talked about getting inside-out, and instead we threw sideways to sideways passes.

“You get what you get when you do that. That was the emphasis before the game. I’ll give them credit. They do a good job, and they are very well coached.”

“We knew they were going to come out and pressure us. They are bigger and stronger than us, so we knew what we had to put in our gameplan to score.”

Delta grabbed an 18-6 first quarter lead, and the Bobcats slowly climbed back but were never able to tie the game, but most of the fourth quarter the Bobcats were within one possession of doing so.

BG had a narrow 27-26 advantage off the glass as Brandt, Hastings and Rath had five caroms each. 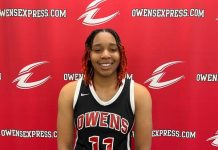