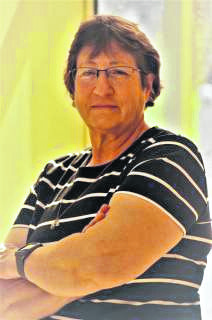 PERRYSBURG — Infrastructure and the economy are key issues for Perrysburg Councilwoman Jan Materni, who is running for the 75th Ohio House District seat on the Democratic Party ticket.

“The number one issue is freedoms, in general, but that includes reproductive, which includes voting rights, includes what I want to read when I go to the library, and not have books banned. It’s across the board,” she said.

Materni was elected to the Perrysburg Council in 2019. She is the chair of the service committee and sits on the safety and public utilities committees, which she feels has been useful preparation.

“That has helped me a lot. When I go to Columbus I’m more aware of what Perrysburg, and Wood County, in general, needs to be a successful county, in education, infrastructure and roads,” Materni said.

She is retired from a career in the Ohio Department of Transportation and intends to use that experience to focus the campaign on infrastructure issues.

Materni includes the internet along with roads in the infrastructure. She said the information superhighway has left out rural America, which was highlighted during the pandemic with schools.

She suggested greater partnership between private and public entities, but that it is a statewide problem that regions can come together for finding solutions.

“It would be nice for (corporations) to partner with different agencies, to get them access to the it. However we can do it, finding federal funds to get (the internet) to rural areas, as well as partnerships. It doesn’t have an easy answer, because your are getting into private enterprise,” Materni said. “Northwest Ohio is flat, and we have issues with it. It’s even more of a problem in the southeastern part of the state. I hope to help get people to come to the table and find solutions that will work for everybody.”

She is also concerned about education, but more broadly than just the schools. She sees the link between education, jobs and the way the economic system is impacting working America.

“I’m concerned about education, as it relates to jobs, and raising up the standard of living for everybody, not just the wealthy 5% of Ohioans, which is what is happening now,” Materni said. “A good way to do that is with a renewable resource. You will hear legislators talking about needing more gas and petroleum products, to help create jobs, but if you look at the statistics for most fields, the job creation is not as much as you promise. What we need is good working jobs for those people who don’t necessarily want to go to college.”

She is an advocate of the vocational education, trade schools and supporting them in public education.

“And not just in skilled trades, but in areas you might not typically think of, like financing, and other areas that have been left behind in schools,” Materni said.

She said that courses in daily practical skills are being dropped.

“Some of the best paying jobs out there don’t require college degrees,” she added. “They do require some kind of education. Not everybody wants to go to college. My son is a good example of that.”

He is a petty officer, 1st Class, in the Navy.

Materni started with ODOT in 1984 as summer help and two years later was hired on as a full-time highway maintenance worker.

“I actually did the physical labor. I shoveled the stone and plowed the snow. I mowed. I did all that and worked my way up,” she said.

She eventually worked on road projects as a project inspector, and then a transportation manager and managed a maintenance facility. She worked in both Ottawa County and northeastern Wood County, primarily in the Walbridge area.

She said that practical experience has come in handy as a councilwoman, particularly when construction contracts and new building projects are discussed.

“I worked with ODOT for 30 years, and a college education was helpful, but it wasn’t needed. Trade school skills would have been much better suited for that,” Materni said.

Materni has been a resident of Wood County since 1984. She is a graduate of Bowling Green State University where she received her bachelor’s degree in history. She also has extra certifications and additional course work associated with her former positions at ODOT.

She is also proud of the way she worked her way through college, as an EMT with Port Clinton EMS.

She is a certified public manager, a two-year certification program “that trains you to be a manager for a public agency. Not all states have it, but Ohio is one of them, but it is a nationally recognized program, with classes on finance, budgeting, ethics and anything that an administrator with the government might need to know.”