In the past, Special Response Teams were often called SWAT teams, or Special Weapons and Tactics. In Wood County, the SRT is based out of the sheriff’s office and is composed of specialists from a variety of first responder units, including police, fire and EMS, from around the county.

Rapid response and deployment is used when the department needs to respond to an incident that involves violence, typically involving firearms. It often also involves hostage and barricade policies.

The examples used in the class were single and multi-shooter incidents at a school, such as Columbine or Uvalde.

“We go to bed and pray that nothing like that ever happens here. It can be one the most devastating things that happens to a community,” Rossford Police Chief Todd Kitzler said.

His philosophy is that “no place is super secure,” but, as a department, they will regularly prepare, study and revise how to prevent and respond to situations.

“If a suspect is actively engaged in the infliction of serious bodily harm or other life-threatening activity toward others, officers should take immediate action, if reasonably practicable, while requesting additional assistance,” states the manual.

At that point, Kitzler stopped and asked the class about a possible policy revision, from “should,” to shall.

He referred to the Uvalde school shooting, where officers on the scene waited for backup, while the shooter continued to fire.

“If it says ‘shall,’ you’ve got to be able to tell me a reason why you didn’t (do something),” Kitzler said of the change in policy emphasis.

“You keep running to the threat,” Kitzler said. “It’s our job to make sure (officers) understand what the community expects.”

Many different scenarios were discussed, along with the current school gun policies. In Rossford, the only guns allowed in schools are with the school resource officers, who also have tactical gear.

Kitzler let class members handle and examine the new police department shields. There is one in each school.

Special Response Team members gave demonstrations during the second half of Wednesday’s class.

Academy member Joe Baz and his son, Memphis, 9, were part of a mock hostage-taking and rescue situation.

Following the demonstration, the class went to the parking lot and examined the two primary vehicles the SRT unit will take to an incident. They have repurposed an armored military MRAP, which had been used during conflicts in the Middle East, and a mobile command center vehicle. The second vehicle has been repurposed from the Perrysburg Fire Department.

“It’s amazing to be so close to these pieces of equipment and be able to go in and look around, when they are not in a situation where you have to be 500 feet away and worried. It’s very informative to watch them come in and see how intimidating they can be. It’s just a heck of an experience,” Joe Baz said.

Memphis was outfitted in a full suit of protective gear, including one of the shields.

He appreciated the protection he now knows the schools have. He also wanted to let all the officers know that he had a lot of fun, and what he liked best.

“It’s the truck and the inside. It’s so cool and the tires are huge,” Memphis said of the sheriff’s MRAP vehicle. “I saw there was a little hole and the guys can get up there and fire from the roof.” 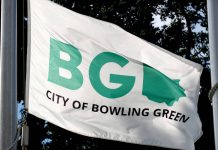 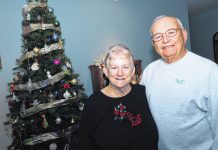