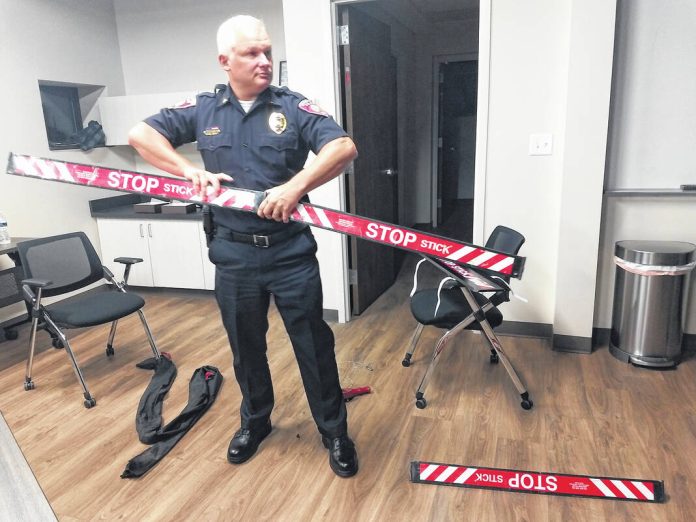 ROSSFORD — Terminating a high speed pursuit is among the most difficult decisions a police officer can make.

“There’s a lot to vehicle pursuits. As a chief, they scare the hell out of me,” Rossford Police Chief Todd Kitzler said at the Citizen’s Police Academy on Wednesday.

The class discussion began with traffic enforcement, proper expected behavior of an officer and what is required of a person who is stopped in their vehicle.

Discussion then moved on to a traffic case study, and Lt. Craig Revill spoke about those difficult considerations related to pursuits, from a very personal perspective.

He talked through the silent dash cam footage from his cruiser, which was taken more than 20 years ago, on the night he was part of a multi-vehicle pursuit that included the death of a mother.

It was August 1999 and a car was driving at about 70 miles per hour in an active construction zone on Interstate 75. Revill turned on his lights and siren, to make a standard speeding ticket stop of a car.

As the four-door sedan appeared to be stopping, it suddenly took off. Weaving through traffic, it faked exiting on Wales Road. It plunged back into traffic, then clipped the car driven by a 43-year-old woman, who also had her adult daughter in the car.

“When those front tires hit the grass median, it rolled six or seven times,” Revill said. “I was watching and I knew immediately, and I’m not going to get into details, but I knew immediately that one of them was dead.

“Luckily, the daughter, she miraculously, I don’t know how, she got out of it with, not minor injuries, but they were not life-threatening,” Revill said.

Another officer was also pursuing, but slightly behind Revill and closer to the wrecked car. He radioed that he would deal with the accident.

The sedan exited the expressway. Driving with a flat tire, the 19-year-old ended up in a used car lot on Botkins Road. Revill thought he had the guy, but then he reversed out of the lot and down Botkins. He ended up off the road, stuck in some bushes after hitting a tree. The driver and two passengers were unharmed.

The driver was running because he didn’t have a license, had misdemeanor warrants and was on probation or parole for a burglary, Revill said. He was eventually sentenced to five years for aggravated vehicular homicide and other driving infractions, he said.

The class then discussed the incident, as well as several other cases.

Kitzler said that Revill did everything correctly. Revill also said that he did have a sudden “overwhelming desire” to pursue.

“In law enforcement circles, it’s called contempt of cop. It’s when you don’t do what I tell you to do, or you don’t stop when I tell you to stop. Then there’s this human nature type thing, because most cops are A-type personalities,” Kitzler said. “You’re not going to run from me. I’m going to chase you from here to Tokyo. …But we have to change that mentality.”

Kitzler pointed to the modern Rossford police pursuit policy, which he helped to write.

The discussion then moved to risk management in a variety of real situations that Kitzler had collected footage of, mostly from police dash cams and body cams, some from the Rossford department.

One case, in Bluffton, involved the pursuit of a violator who killed a police officer.

“They were focused on getting that dude,” Kitzler said. “You can bet there were supervisors from four or five agencies telling the officers to get that guy.”

The choice to terminate a chase becomes very difficult, both for the officer and up the decision-making line.

“It’s like a dog chasing a rabbit, and you have to fight that. It’s hard,” Kitzler said.

Some cities have eliminated vehicular pursuit as an option. But Kitzler said that he wouldn’t want to live in a city where the criminals knew they wouldn’t be pursued. However, some larger Ohio cities will have 10 pursuits a day.

The class discussed options for pursuit intervention — other than a chase — such as blocking or boxing in a vehicle with police vehicles. In many cases, video surveillance and the perpetrator’s seized cell phone GPS records will be enough to solve many problems.

Revill also showed one of the department’s stop sticks, for tire deflation.

Kitzler said that ramming with a vehicle, the roadblocks that are seen in movies, and deadly force are a last resort.

“I better have reason to use deadly force, or you’re going to be in serious trouble,” Kitzler said.