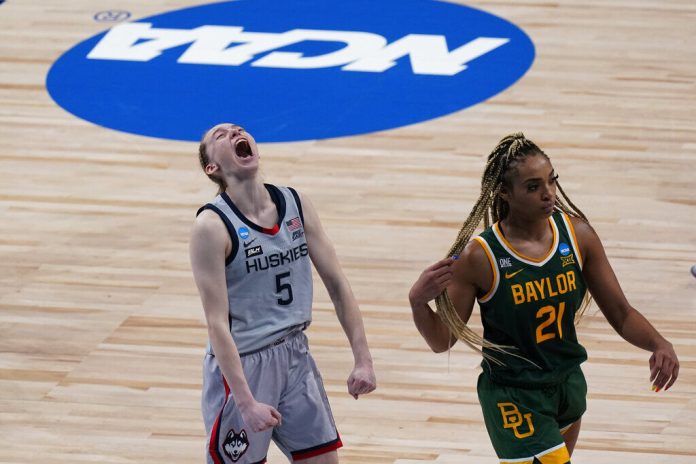 "Each year that we do it, I still can’t believe it," said UConn coach Geno Auriemma, who was
showered by his team with confetti after the game.
UConn has made the national semifinals every season since 2008 and won six titles during that span. The
Huskies will face Arizona on Friday night. The Wildcats are playing in their first Final Four after
beating Indiana.
Bueckers was 6 years old when UConn started its run of appearances in the national semifinals.
"To be part of that history is wild," Bueckers said. "It’s why I came here. … Saw that
as a young kid, wanted to be a part of that. It’s surreal."
The Huskies (28-1) trailed 55-45 late in the third quarter before scoring 19 consecutive points,
including 10 by Bueckers, who became the third first-year player to make first-team All-America.
"Paige got that look in her eye, started getting some buckets. And when Paige is scoring, the rest
of the team really gains a lot of confidence," Auriemma said. "Our defense got just really
good at the end, and we got some great stops."
Baylor (28-3) wouldn’t go away as Bueckers went cold in the final minutes. Trailing 64-55, NaLyssa Smith,
an All-American herself, ended the Lady Bears’ drought with 6:47 left and sparked a 12-4 burst that got
Baylor within one after DiJonai Carrington converted two free throws with 19.3 seconds left.
After a timeout, Baylor fouled Christyn Williams, who missed both free throws to give the Lady Bears one
last chance.
Carrington, who finished with 22 points, drove the lane to the left and missed a contested jumper from
the baseline where a foul could have been called, but wasn’t.
"I personally don’t see it as a controversial call. I’ve seen the replay, and one girl fouled me in
my face and one girl fouled me in my arm," Carrington said. "So, at that point you can’t do
anything else. We drew up a play, (Smith) got fouled posting up and I got fouled driving. Nothing we
could really do about that situation in particular. But, you know, turn the page."
LeBron James even tweeted that a foul should have been called. Baylor coach Kim Mulkey agreed.
"I’ve got still shots and video from two angles. One kid hits her in the face and one kid hits her
on the elbow," Mulkey said.
Williams corralled the rebound and was fouled with 0.8 seconds left. She hit one of the free throws
before Bueckers stole the inbounds pass at the buzzer.
No team has played UConn tougher over the last decade than Baylor, with each team winning four of the
matchups. The Lady Bears (28-3) had won the previous two, including a 74-58 win at Connecticut in
January of 2020.
They were supposed to meet this past January, but Mulkey came down with COVID-19 around Christmas and the
game was canceled.
The game got off to a fast start for UConn, which jumped out to a 16-4 lead behind Bueckers. But Baylor
was just getting going. The Lady Bears closed the action-packed first quarter with a 20-10 run and
trailed 26-24 after one.
"It seemed like for long stretches there, I just thought we were being manhandled there. They’re
bigger, quicker, faster, stronger," Auriemma said. "But we got a couple of key stops when we
had to."
The offense slowed down in the second quarter. There were 11 blocks combined in the first half, including
seven by Baylor, which led 39-37 at the break.
Carrington provided a huge spark off the bench, scoring 14 points to go along with two steals and a block
in the opening 20 minutes.
Baylor went on a 10-2 run in the third quarter to push ahead 55-45. Then UConn took over, scoring the
final eight points of the period after Lady Bears point guard DiDi Richards injured her hamstring when
dribbling down the court and exited the game.
"We were up 10 at that point," Mulkey said. "Had to be a hamstring. Swung the whole
momentum."
Williams and Bueckers highlighted an 8-0 spurt that made it a two-point game heading into the fourth
quarter, when Richards returned only briefly.
Williams finished with 21 points and Evina Westbrook had 11, combining with fellow guard Bueckers for 60
of the Huskies’ points as the Lady Bears neutralized UConn’s front court.
STILL SIDELINED
UConn starting guard Nika Muhl missed her third straight game with a sprained right ankle she suffered in
the team’s opening-round win over High Point.
___
More AP women’s college basketball: https://apnews.com/hub/womens-college-basketball and
Tweets by AP_Top25