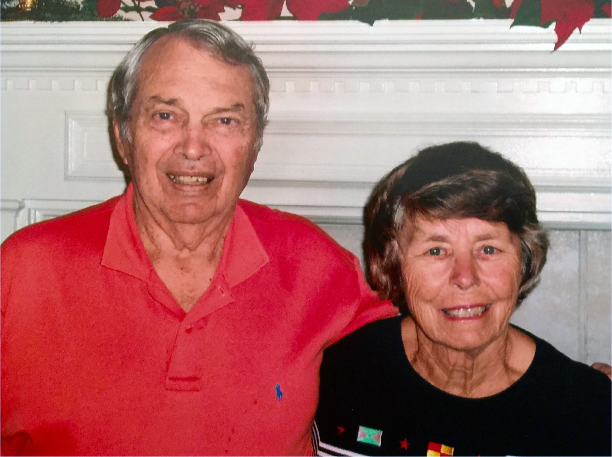 After nearly 64 years of marriage, Robert (Bob) M. Gibson Jr. and Cynthia H. Gibson passed away within 11
days of each other at Shell Point Retirement Community in Ft. Myers, Florida.
Cynthia died March 30, 2015, shortly after falling and breaking her hip. She was 85 years old. Bob died
due to complications from throat and liver cancer. He was 88 years old. They both lived a long, full,
wonderful life, and were in good health just prior to their deaths.
Cynthia and Bob were preceded in death by their son, Dick (Marcia), who passed away on October 10, 2013.

They leave behind two sons, Dave (Debbie) of Ft. Myers, Florida and Doug (Alicia) of St. Augustine,
Florida. They also leave behind seven grandchildren: Travis, Jessica, Tyler, Tanner, Jake, Lauren, and
Reagan.
Cynthia Heim Gibson was born August 28, 1929, the daughter of Phillip and Elsie Heim of Poland, Ohio.
She graduated from THE Ohio State University with a Bachelor’s Degree in Education. Fifteen days after
graduation, on June 23, 1951, she married Bob. This started Cynthia on her journey as the wife of a
football coach. She taught kindergarten and first grade for many years in the Bowling Green School
District, while raising three boys, attending all of the kids many sporting events and all of Bob’s
football games. Cynthia was the perfect coach’s wife.
After Bob retired from football, the family moved to Sanibel Island, Florida in 1978.
For 37 years, Cynthia spent her time walking the beach every morning with her dogs and collecting shells.
She also loved to ride her bike, play tennis and make hats with her Knitting Club who then donated them
to under-privileged kids in the area. Making Key Lime Pie was her specialty. Cynthia enjoyed spending
time with her grandchildren and working in her garden.
Bob was born April 6, 1927, the son of Robert and Marguerite Gibson of Youngstown, Ohio.
He attended Woodrow Wilson High School, where he excelled in football, baseball, and basketball. He
joined the Navy just prior to the end of World War II and served 18 months before enrolling at
Youngstown University from 1946-1950, where he played baseball and was quarterback on the football team.

In 1988, he was inducted into the Youngstown State University Athletic Hall of Fame.
Bob’s first coaching job in 1950 at Leetonia High School, followed by East Liverpool High School from
1953-1955, where the team achieved their first undefeated season in the school’s history. He accepted
his first college coaching job in 1955 at Bowling Green State University (BGSU) in Ohio. In 1959, BGSU
won the National Small College Championship. After working as an assistant coach for nine years, Bob was
named Head Football Coach at BGSU, replacing Doyt Perry. In his first season as head coach, the
“Falcons” won the Mid-American Conference Championship title in 1965.
After leaving BGSU in 1968, Bob held coaching jobs with the Toronto Argonauts in the Canadian Football
League, the Memphis Southmen and Charlotte Hornets in the World Football League, and the Detroit Lions
and the N.Y. Giants in the National Football League.
He retired from coaching in 1978, and moved to Sanibel Island, Florida, where he was a developer, small
business owner, and a cattle rancher.
Even after he left coaching, Bob continued to be a student of football. He received his greatest
satisfaction in life from teaching others, his relationship with his fellow coaches and players, as well
as being with Cynthia, his children and his grandchildren.
Our family would like to thank the staff at Shell Point Pavilion, The Springs, and Hope Hospice for the
wonderful care they provided to our parents in their final days. We are indeed blessed that our Mom and
Dad were surrounded by so many great friends, coaches, and players during their lifetime.
In lieu of flowers, contributions can be made in their names, to the Sanibel Captive Conservation Fund or
Hope Hospice of Ft. Myers.
The family will hold a “Celebration of Life” at a future date.