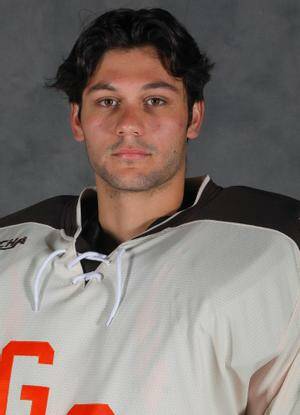 The Hockey Commissioners Association has named Bowling Green State University sophomore Christian Stoever to the Watch List for the 2023 recipient of the Mike Richter Award, an annual award given to the top goaltender in NCAA Division I Men’s Hockey.

“We are really happy for Christian,” BGSU coach Ty Eignear said. “He continues to improve and has done a very nice job for us in his sophomore season.”

It is Stoever’s first recognition of his career. He has been recognized by the Central Collegiate Hockey Association with a monthly or weekly honor three times this season.

Stoever is one of 41 NCAA Division I goalies named to the Richter Award Watch List. He is one of five representing the CCHA.

The sophomore has 575 saves on the season, ranking first in the conference and sixth in the nation. He has a 2.99 goals against average and a .916 save percentage.

This season, Stoever has 10 games with 30 or more saves, including a 39-save shutout of Ferris State. He is currently the only netminder in the nation with more than 505 saves in less than 1,100 minutes in net.

In BGSU’s win over RPI on Dec. 30, he stopped a penalty shot and had an assist. He averages over 30 saves per game, making him the only CCHA goaltender with more than 25 saves per game.

Stoever is the first Falcon to be named to the Richter Award Watch List since 2021, when Zack Rose and Eric Dop were recognized.

Offense clicks as Jackets down Springfield, 74-49