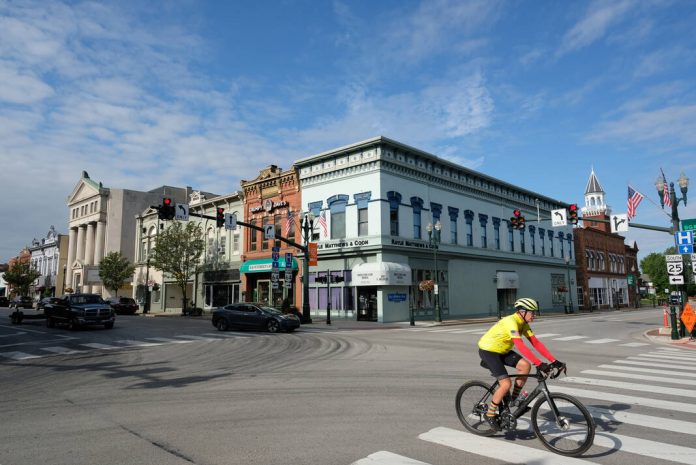 On Monday, Bowling Green Council passed an update to its vision for how bicycle infrastructure could go forward in the city.

Council voted unanimously on a resolution approving revisions to the Bicycle Facilities and Destinations Map in the Transportation Section of the city’s Comprehensive Master Plan. The map had not been updated since 2008.

Council heard a presentation on the map in September from Pat Etchie of Mannik and Smith, and then forwarded the matter to the Planning Commission for their recommendation. The commission, in a November meeting, recommended that council adopt the updated map.

In a letter to the commission, Planning Director Heather Sayler noted that Mannik and Smith “analyzed traffic volumes and crash statistics, and received input from the city’s Bicycle Safety Commission. A community-wide survey, led by a group of Master of Public Administration students at Bowling Green State University, was also part of the analysis that went into drafting the updated version.

As discussed by Etchie during his September presentation to council, the map proposed potential shared use paths along portions of Haskins Road, Newton Road, East Wooster Street, East Poe Road, County Home Road, and others. It further suggested portions of Poe Road, Wintergarden Road, Napoleon Road, Maple Street, Mitchell Road, Conneaut Avenue and others as a “potential shared road corridor” – meaning those roadways could utilize a mix of sharrows, signs or on-street bike lanes depending on what was determined to be feasible. Sharrows are icons on the road depicting a bicycle and chevrons, which indicate that bicycles may share the roadway.

Etchie also suggested improvements to crossings in the Main Street Corridor and, in the Wooster Street Corridor, for the city and BGSU to explore widening sidewalks along the north side of Wooster Street from Thurstin Avenue eastward to connect to a recently-installed shared use path which starts at Alumni Drive.

Council approved two amendments to the map, both involving consideration for bicycle infrastructure along major streets in the city.

The first amendment, proposed by Councilwoman Rachel Phipps, added a dotted pink line along the length of Main Street between Napoleon and Newton Roads, indicating a “potential shared road corridor study.” The map would also reflect that this is a 2023 strategic goal of council.

The amendment had been discussed during a public hearing on the map held prior to Monday’s council meeting by the Planning, Zoning and Economic Development Committee, which is chaired by Phipps.

“We’re not forcing anyone to build a bike path down Main Street,” Councilman Nick Rubando said during the council meeting. “I think it’s important that we put this in our planning document to show that this is something we are exploring.”

The second amendment, which was also mentioned during the committee meeting by Bicycle Safety Commission chair Steve Langendorfer, and proposed by Councilman Joel O’Dorisio, dealt with adding a similar line and study on West Wooster, ending at Haskins Road.

Council President Mark Hollenbaugh, who said he was willing to accept the previous amendment because it was a specified goal of council, argued, however, that “this was not and it’s being introduced at the last minute without any fore-notice to give me a chance to do any kind of research on it on my own as to what it would entail to add this to the map.”

The amendment passed 5-2, with Hollenbaugh and Councilman Greg Robinette voting against.

Council also voted down an amendment offered by Councilman Jeff Dennis, who proposed that the word “sharrow” be removed from the definition of “shared road corridors” on the map.

“My intent would be not to plan to add additional sharrows” in the city, though Dennis noted that “This is a planning document. Nothing here is binding.”

He argued that sharrows are too expensive – one mile of them costs $10,000, Dennis said – and were not as effective as other things, such as signage, which the city has had for decades.

The amendment failed by a vote of 4-3, with Hollenbaugh, Phipps, Robinette and Rubando voting against it.