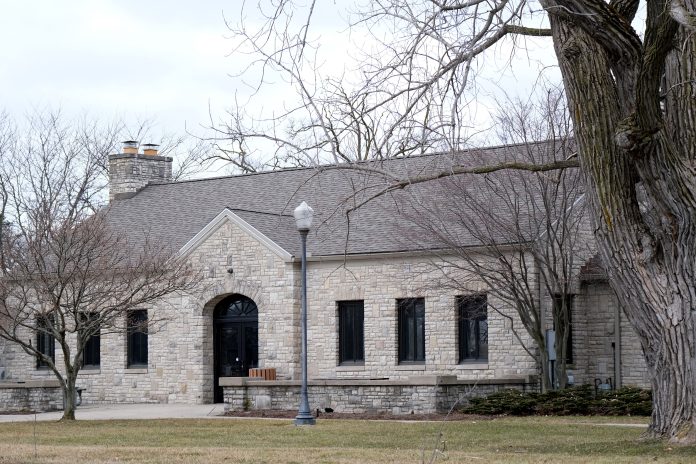 Concerns about the structural integrity of the floor at Thompson Stone Hall at Otsego Park are unfounded.

Wood County Park District Assistant Director Andrew Kalmar reported at Tuesday’s board meeting that concerns that the concrete floors at the shelter house were falling apart are not true.

He showed pictures of the basement that showed where concrete was falling off.

Steel reinforced beams, added in 1990 due to concerns about the floor at that time, crisscross the basement and because of that framework, there is no concern about the structural integrity of the floor, he said.

“During the evaluation that was completed for this project, they determined that because we have that steel frame built in the basement, they are not concerned at all that we have a structural problem with the floor,” Kalmar said.

“In fact, they said that those steel-reenforced concrete rims could fall off that ceiling and it wouldn’t affect the structure of the floor at all,” he added.

However, there is no steel framework in the southeast corner of the basement, which is a mechanical room. It has been suggested that steel beams be added to this area.

The project is complicated as the plumbing for the building is attached to the ceiling in that area, Kalmar said.

The next step is to get quotes on both the cost of steel and labor to add the beams and move the plumbing pipes.

Established in 1937, Otsego Park is the oldest of the Wood County Parks and the shelter house, formerly known as the Otsego Stone Hall, is the oldest building in the park system.

Also at the meeting, Tom Myers was elected as chairman of the park board and Sandy Wiechman was elected vice chair.

This is Myers’ sixth and final year on the board.

Wendy Headley and Rebecca Ferguson were welcomed as the newest commissioners. Both were appointed in December and will serve terms ending Dec. 31, 2025.

They replaced board members Dennis Parish and Kim Rose.

“I’m looking forward the knowledge they bring to the board,” Wiechman said.

• Agreed to continue participation in the Owens Community College Center for Law Enforcement and Professional Development training consortium at a cost of $500.

• Accepted an Edward Byrne Memorial Justice Assistance grant for $30,000 that will be used for portable radios for the police department.

This will allow the rangers to communicate with multiple organizations, said Chris Smalley, park district director.

The park district will make the purchases and be reimbursed from the grant.