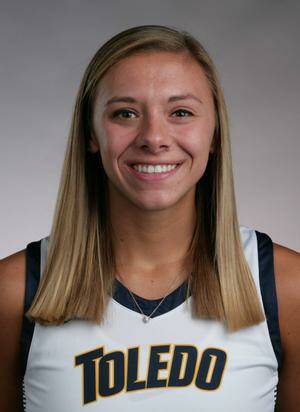 TOLEDO – The Toledo women’s basketball team got back in the win column with a huge 83-76 win over Ball State before 4,027 fans at Savage Arena on Wednesday.

Rossford graduate Sammi Mikonowicz scored 13 points and led the Rockets with seven rebounds, but she wasn’t the biggest news on the court this night.

The Rockets (11-3, 2-1 MAC) led big after the first quarter, but found themselves trailing the Cardinals (12-4, 2-1 MAC) by two points heading into the locker room at halftime.

Both teams shot over 50 percent from the floor in the second half, but Toledo forced 10 turnovers and made 16-of-19 free throws to pull away down the stretch to claim the victory in a battle of two MAC heavyweights.

“I’m so proud of our players,” head coach Tricia Cullop said. “This was a great game between two of the best teams in the MAC who were trading blows all game.

“Ball State shoots the three so well and they’re really tough to guard, but I was really proud of our composure. Every time they threw something at us, we answered. I can’t praise our kids enough for their mental toughness, especially bouncing back after what happened to us on the road last weekend.”

Lockett and Wiard were outstanding on Wednesday. Lockett led all players with 23 points, knocking down 9-of-11 two-point field goals while tallying a team-high three steals and grabbing five rebounds.

In addition to achieving her personal milestone, Wiard scored 12 points and tallied a game-high eight assists while committing zero turnovers.

The Rockets shot 50 percent from the floor, making 29-of-58 shots, while Ball State made 30-of-64 shots and 11-of-24 three-point field goals. Toledo held a significant advantage at the charity stripe, making 21-of-24 free throws while the Cardinals were just 5-of-6 from the line.

Next up for Toledo is a pair of tough road tests, beginning with Saturday’s game at Kent State (10-4, 2-1 MAC).

The Rockets then head south for the Battle of I-75 presented by Cooper Tires for a matchup with archival Bowling Green (13-2, 2-1 MAC) on Wednesday, Jan. 18.