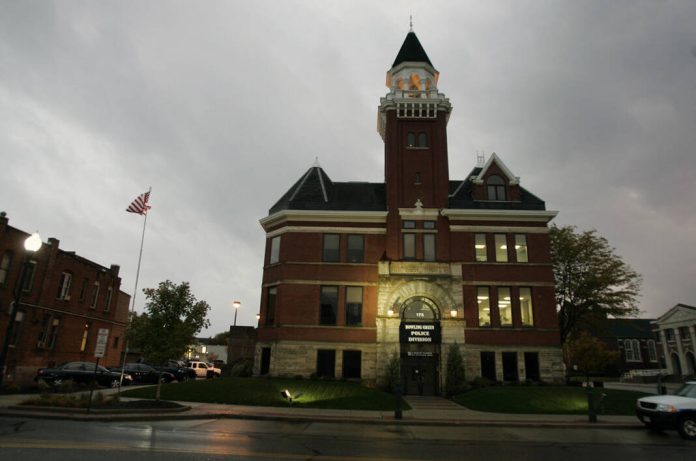 A Bowling Green man who reportedly brandished a gun downtown on Sunday was arrested.

Bowling Green police were called to the area of East Wooster Street and Thurstin Avenue shortly before 8 p.m. on a report of a man brandishing a gun.

The officer spotted a man matching the description given walking eastbound on the sidewalk. As the officer got out of the cruiser to approach the suspect, the man, later identified as Noah Swope, 42, put his hands up in the air and walked toward the officer, according to the Bowling Green Police Division report.

Once detained, Swope told the officer he had a firearm. The officer located a Daisy Powerline 426 BB gun with 15 copper BBs in the left front pocket of his vest. Two pocketknives also were found on Swope.

Swope said that he was intoxicated but had not been at a bar. A bottle of rum was found in his bookbag, according to the report.

When asked if he had displayed the gun to anyone, he said he did not have a gun. He then said people were trying to kill him and that he would not provide any more information.

As the officer was speaking with Swope, dispatch advised they received another call about a man with a gun on East Wooster and North Prospect streets, according to the report.

Swope, who was then placed in the back of the police cruiser, began using several obscenities and kicked the door of the cruiser. When told to stop, he did so.

One woman told police that she observed a man with a gun in his right hand who walked behind her vehicle while she was stopped at the stop light at Thurstin and East Wooster. A second witness in the vehicle stated that the man then stood on the sidewalk and slightly raised the gun up with two hands on it.

A third witness at a downtown bar said the suspect had pulled a weapon while inside the bar.

Yet another witness said he observed the suspect pull a gun in City Lot 1.

A fourth witness stated he observed the suspect with the firearm in the alley in the 100 block of East Wooster.

After getting medically cleared at the hospital, Swope was taken to jail and charged with two counts inducing panic and one count disorderly conduct/unable to care for self.

He was taken to jail and released on an own recognizance bond Monday.