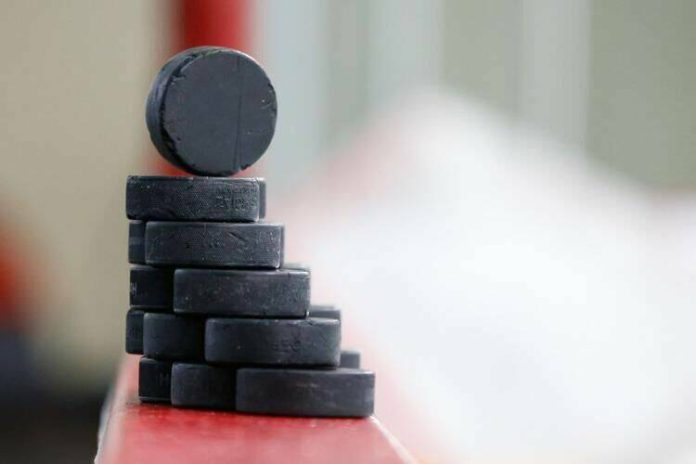 Bortz’s winning shot was redirected in front of the net and past BG goaltender Cade Contris. Bortz’s goal came with 4:10 remaining, breaking a 2-2 tie and marking Perrysburg’s second score in the third period as the Yellow Jackets came back from a 2-1 deficit.

Cody Schneider got Perrysburg on the board first, scoring unassisted on a shorthanded goal with 8:21 remaining in the first period.

BG forward Hayden Joseph tied the game at 1-1 with 1:16 remaining in the first, assisted by forwards Ethan Helvoigt and Rhett Winger.

After a scoreless second period, Helvoigt scored on an assist from Joseph, putting the Bobcats ahead 2-1 with 7:11 remaining.

Less than a minute and a half later, Perrysburg’s Caden Seiple broke away and scored unassisted to tie the game at 2-2, setting up Bortz’s game winner. Perrysburg goalie Sam Yonker got the win in net, but Perrysburg put up 38 shots, including a 25-17 advantage entering the final period.

“We dug in and fought hard as Yonker fended off multiple attacks the rest of the way and Bortz’s goal held up to be the winner,” Perrysburg coach Kevin Fisher said.

BG played the whole game without committing a penalty, the first time this has happened in a Red Division game this season, says NHC Commissioner Keith Instone.

Perrysburg was coming off a 9-4 victory over the Lake (10-3) club team on Saturday at Tam-O-Shanter in Sylvania. Schneider had a three-goal hat trick plus two assists in the win over Lake.

Seiple scored twice and Bortz, Pisula, Ryan Butler, and Alex Wilhelm scored one goal each for the Yellow Jackets with Jackson Baltzell getting three assists. For Lake, James Bickey had one goal and assisted on the other three, and Clay Soltis, Asthon Graham, and Bailey Coe scored one goal apiece for Lake.

However, on Friday the Yellow Jackets fell to host Findlay (12-7 overall, 1-3 NHC Red), 4-2, in another NHC Red Division matchup at The Cube.

The Trojans pulled ahead of Perrysburg early in the third period and iced it with an empty-netter to get their first league win of the season. The Yellow Jackets had the advantage in shots, 23-15.

Perrysburg is 11-8-1 overall and 2-3 in the Red Division. BG fell to 11-9-3 and 1-3 after going 0-3 for the weekend. BG coach Connor Rogowski said, “It was not a great weekend,” adding that his team is playing through key injuries right now.

Against Northview, the Bobcats suffered their worst defeat since getting mercied twice in 2019-20, their first season back after their one-year hiatus. The Wildcats led 46-21 on shots. Tryston Harrell got a point in six of the nine Northview goals.

In other NHC Red Division games this past weekend, St. Francis beat St. John’s 3-2 in overtime at Tamo-O-Shanter Friday. The Knights tallied twice late in the third to tie it and won it on the power-play 30 seconds into OT. Jamison Rose had the first and last goal for St. Francis. Shots were St. Francis 46, St. John’s 32.

In the NHC White Division, Lake is still in first (4-0) with Clay in second place (3-1). Lake tied a non-divisional game with Anthony Wayne, 6-6, on Sunday at the Toledo Ice House. Lake also defeated Sylvania Southview, 11-1, on Friday at Tam-O-Shanter in a White Division matchup Friday.

All three White Division games between Southview, Toledo Whitmer and Springfield have gone into overtime, with the Cougars winning twice and the Whitmer-Springfield game ending in a tie.

We are at exactly the halfway point in the White Division season, with 10 league games played and 10 to go. Each team has played the other teams once and will face them one more time.

The Trojans went 2-1 and the Bobcats 1-2 last year in the tournament. AW joins them this time. Besides host WJ, Cleveland Benedictine, Rocky River, Powell Olentangy Liberty and Team Ohio round out the eight-team field. The two-game “pool” round features Team Ohio vs. the Bobcats and Trojans.

Perrysburg, Clay and Springfield are in the Pioneer tournament in Columbus, hosted by Olentangy Orange. Perrysburg will be in the Orange Varsity bracket vs. Hudson, Olentangy Braves and New Albany.