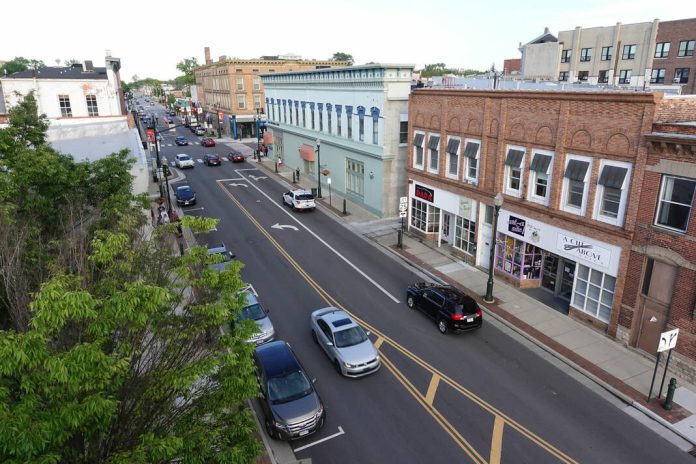 Referred to frequently as the “PR,” the proposed district is a neighborhood area located in a rough, elongated donut around the downtown. The proposed area is bordered by Poe Road to the north, Napoleon Road to the south, and on the east largely by Enterprise Street. To the west, it is substantially bordered by Maple Street, but it also extends to include portions along Eberly and Gorrell avenues. Among the Pedestrian Residential district’s major features is that it would allow some businesses to operate within that neighborhood district, and alter minimum lot dimensions.

John Sampen said that the city has a “unique architectural heritage, including commercial structures and homes dating back” more than 150 years.

His chief concern was that new businesses dispersed into the neighborhoods would draw customers from the city’s central commercial district, negatively affecting the downtown and its buildings. Sampen also said the ongoing expense of maintaining “quirky older houses” means that homeowners need assurances of stable home values.

Kathleen Dennis said that council should engage the community on the PR issue.

“Bring your community together and get information from your community as to what they want in their neighborhoods,” she said. “Bringing certain things from a large city into these smaller communities can be very detrimental to the development of the community.”

Kelly Mangan asked about the process for the zoning code going forward. Council recently completed a series of five working sessions designed to consider changes to the code suggested by the planning commission and council members.

Councilwoman Rachel Phipps, who led the working sessions, said that ZoneCo, the firm which the city contracted to work on the code, will now take the edits and produce a clean draft of the code. After than, she said council will hold a forum on the PR, and also one or two other forums on the whole code itself. Following that, she said that, taking the feedback from the community, additional edits can be made to the zoning code draft before the ordinance itself is added to council’s formal agenda. Once added, the code will receive three readings, a public hearing, and, eventually, a vote.

Resident Fern Kao asked how many council members actually live in the area that is proposed to become the PR. Jeff Dennis and Nick Rubando raised their hands.

In other business, council heard from Mary Hinkelman, executive director of the Bowling Green Chamber of Commerce and the Visit BG Ohio organization, on Visit BG Ohio’s annual report.

Among the highlights, Hinkelman noted grants awarded by the organization, including one to the Ohio Wine Producers Association for the Vino Wine Festival which took place in 2022.

“It’s a new event with great potential,” she said.

Grants from the organization also expanded the city’s fireworks event to include a festival which, she said, drew thousands of attendees, and supported shuttles for the National Tractor Pulling Association and Black Swamps Arts Festival which took attendees from their hotels to the events with stops in the downtown. She also noted sponsorships of local events including Firefly Nights, the Wood County Museum, Special Olympics and Bowling Green Youth Baseball.

Hinkelman said that the organization has contracted with a marketing firm on a new community events calendar, and that funding has been set aside to again produce the BG Living magazine in 2024.

• Heard from Council President Mark Hollenbaugh, who praised the work of city employees over the holidays.

“I’m always impressed with the hard work, the dedication, and the professionalism of all of our city employees,” he said. “And particularly, over the holidays, starting with the terrible freezing cold, and the fires we had,” as well as the New Years’ weekend.

• Introduced an annual ordinance authorizing Municipal Administrator Lori Tretter and Public Services Director Joe Fawcett to advertise for bids and enter into contracts for sidewalk improvements, pavement striping, deicing salt, and improving streets, alleys and other public ways in the city. The legislative package document prepared for council stated that “much of the work authorized by this legislation is annual maintenance items such as striping streets and crosswalks.”

• Introduced an ordinance authorizing the agreement between the city and the Wood County Regional Airport Authority. The legislative package document noted that “in 1974, council enacted Ordinance 3199 authorizing the city to share in the costs of operating the Wood County Airport. Each year, the amount of the city’s support is established by agreement with the” airport authority. “The subsidy programmed in the city’s 2023 budget is $30,000. This is the same amount budgeted in 2022.”

• Approved the appointment of Finance Director Dana Pinkert and City Attorney Hunter Brown to the city’s records commission. Pinkert’s term runs through May 31, 2026; Brown is serving on the commission as an ex officio member.