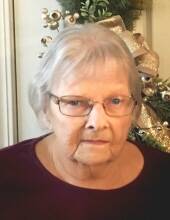 Shirley Jean Church, 82, of Weston, Ohio lived a beautiful, gracious life. She was born in Norwalk, Ohio to Kenneth and Donna (Farley) Houghtlen on August 6, 1940. Surrounded by loving family, Shirley passed on from her body to live her eternal life in the presence of the Lord on Friday, December 16, 2022.

Raised in Norwalk, Ohio, Shirley attended East Townsend High School. In grade school, Shirley met her husband Jack, although, at the time, neither knew marriage would come years later. Shirley came from a large, hard-working family. As the eighth in a family of ten children, Shirley learned many of life’s valuable lessons at a young age. Memories of a childhood move fittingly summarized much of Shirley’s early years. She would speak of the ten-mile-long, horse-drawn wagon ride equipped with the family’s belongings and the children strapped to the top while the family’s livestock were tethered to the back. The Houghtlens learned the true meaning of appreciation while living a self-sustaining life on their 55 acre farm. Shirley and her surviving siblings, brother Dale (Fran) Houghtlen and sister Mabel Rossi, would agree; they had all they needed growing up. Many siblings preceded Shirley in death; brothers, Kenneth Houghtlen Jr., and Fred Houghtlen, as well as sisters Donna Header, Flossie Martinez, and Betty, Neva, and Bonnie Houghtlen.

At the age of seventeen, Shirley began working at Miranda’s Diner in Sandusky, Ohio. One day at work, sometime later, Shirley noticed a patron of the restaurant who couldn’t seem to take his eyes off of her. It was then that she became reacquainted with her childhood school-mate, and soon to become love of her life, Jack. Shirley married Jack Church on August 25, 1962 and eventually moved to Weston, Ohio where they raised their family. Together, they taught their daughters integrity, loyalty, work ethic, and compassion, instilling them with confidence to pursue life with fervor, grit, and determination. Shirley was fiercely independent, and her willpower was akin to few – she would accomplish anything she put her mind to. After moving to the area, Shirley worked beside her husband at the Bonded gas station, then at Ben Franklin, before finally retiring from Bowling Green State University.

Jack and Shirley recently celebrated their sixtieth wedding anniversary and the legacy of what has always been most important to them; their family. Jack truly adored Shirley, and she proved to be the best partner one could ask for. No matter the endeavor, if Jack set out for it, Shirley was by his side helping every step of the way. Shirley also learned to take some advice from her mother-in-law early in their relationship… ‘just make him think it was his idea, and you can get him to do anything.’ Along with her husband of 60 years, Shirley is survived by her daughters Jackie (Barry) Roberts, Lisa (Bruce) Kiene, and Amy (Mark) DeTillion. Also surviving are grandchildren Richard Clark Jr., David Clark, Brandy (Ron) Hartman, Jaime (Matt) Roberts-Kaminski, Justin (Shelia) Kiene, Chelsea (Jack) Kiene, Ava (JC) Kiene, Ian (Brittany) Wilhelm, Tyler Wilhelm, and Celeste DeTillion, as well as great-grandchildren Cody, Dawson, Elley, Bodee, Jay, Skylar, Olivia, Hayden, and Bristol. She is preceded in death by daughter Debbie Ash and granddaughter Shelly Clark.

Shirley loved fried-chicken, cream-style corn, circus peanuts, Mars bars, coffee, and Mt. Dew. She was quite fond of her privacy, the color blue, bird watching, and her pets. Particularly talented in gardening, Shirley treasured tending to flowers, fruits, vegetables, and even fairies. She enjoyed cooking and her family knew her canned pickles and shredded beef sandwiches well. She loved listening to, singing, and playing music and was skilled at playing the saxophone, accordion, and organ. Her daily endeavors most typically included soap operas on CBS and keeping Jack in-line. She enjoyed being outdoors, taking her daughters fishing, and the warmth of the sun in the summer time. Above all else, Shirley’s biggest love was her family.

Nothing brought Shirley more joy than knowing her family was happy, healthy, and safe. Her family was her sole focus, and she worried over and took care of them until the end, sometimes to the exclusion of her own needs. All who knew Shirley knew she provided comfort and solace to those she loved while asking little in return. She loved her entire family, despite their quirks and imperfections. She fretted about them, rooted for them, protected them, and always kept on loving them. To her husband, children, grandchildren, and great-grandchildren Shirley leaves her never-ending kindness, unfathomable gratitude, intense tenacity, and unconditional love.

Visitation will be held on Friday, December 23, 2022 from 9:00 to 10:30 a.m. followed by the funeral service at 10:30 a.m. at Dunn Funeral Home, located in the Historical District of Bowling Green at 408 W. Wooster St. A burial will immediately follow services at Weston Cemetery.

Memorial contributions may be given in her memory to St. Jude Children’s Research Hospital.