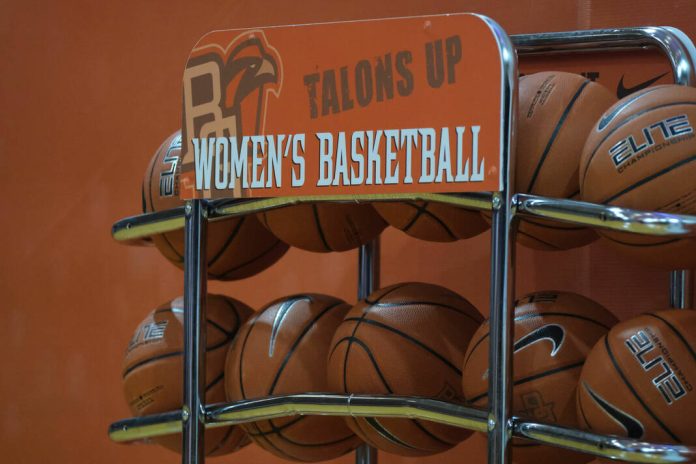 SOUTH PADRE ISLAND, Texas – For the Bowling Green State University women’s basketball team, the storyline has been a familiar one: Take an early lead, then keep that lead for the remainder of the game.

On Monday afternoon, the Falcons followed that script to a T.

A total of 13 different players scored for the Falcons (9-1), who have won seven-straight games. Eight of those BGSU players scored at least five points on Monday.

“It was a great team win on the road,” BGSU coach Robyn Fralick said. “It’s been a great experience coming to Texas and being at this tournament.

“Today, I thought we really settled in, especially in the third quarter. We did a great job of putting together a lot of consecutive possessions.”

BGSU’s 9-1 start to the season is tied for the best in school history.

Nyla Hampton and Morgan Sharps led the way with 17 points apiece, with Lexi Fleming adding 15. Hampton and Sharps each went 7-for-10 from the floor, with Hampton adding six assists and a game-high four steals in the win.

Sharps and Fleming each went 3-for-5 from the three-point line, with Flaming adding four assists. Eight different Falcons, including Sharps, had two or more assists in the contest.

In fact, BGSU had 30 assists – the fourth-highest single-game total in school history – on 38 field goals.

The Falcons forced the Lions into 24 turnovers, and BG had a team total of 14 steals along with a 32-9 advantage in points off of turnovers.

The Lions responded by scoring the game’s next six points, but the Falcons responded to that run with a run of their own. Transition buckets by Kadie Hempfling and Fleming began an 11-0 BG run to end the third quarter, and the Falcons had a 74-41 lead after 30 minutes.

The Falcons have forced the opponents into a total of 221 turnovers this season, an average of 22.1 per game, while committing just 122 (12.2 per game) themselves.

Then, after a break for the holidays, BGSU will wrap up the non-conference schedule with a home game vs. Findlay on Dec. 30. That contest is set for a 2 p.m. start at the Stroh Center.