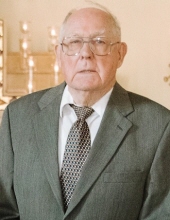 Harold graduated from Culver High School in Indiana and immediately following graduation joined the United States Marines where he spent the majority of his time in Japan. After returning to Indiana, he attended Butler University where he met his wife Marcia and graduated with a bachelor’s degree in liberal arts.

In 1968 Harold and his wife Marcia started their residential construction company under the name McCarty’s Heritage, Inc. Their company excelled, which prompted them to begin a second career as McCarty Manufacturing which manufactured roof trusses and assembled wall panels. In 1978 these two companies merged and Harold and Marcia became founders and operators of Automated Building Components (ABC) in North Baltimore, Ohio. Together, their insight and leadership took a small family construction business and turned it into one of the best known names in the design and manufacturing of roof truss, wall panel, and floor systems industries in the United States.

Harold was a member of St. Aloysius Catholic Church in Bowling Green and a member of numerous Home Builders Associations throughout the state of Ohio. He was a licensed pilot, loved to travel and was a lifelong learner. He was the former president of the North Baltimore Rotary Club where he devoted time to traveling for missionary service. In 1996 he and his wife were named Entrepreneur of the year in manufacturing. In 2004 he was named the Wood County Democratic Man of the Year.

He was preceded in death by his parents, wife Marcia, 2nd wife Sarah and his siblings Joseph, Russell, Mary Alice, Kenneth, Patrick, John, Grace and Maxine.

Services for Harold will be private for the family. Funeral arrangements have been entrusted to Dunn Funeral Home, located in the Historical District of Bowling Green at 408 West Wooster St.

Memorial contributions may be given in his memory to St. Aloysius Catholic Church in Bowling Green.