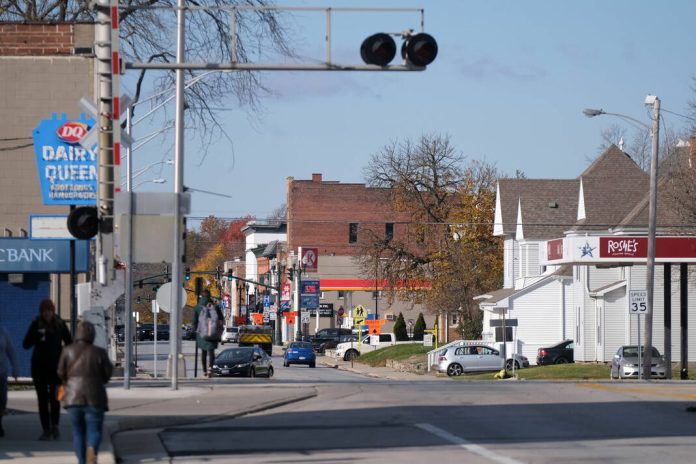 A total of 14 people addressed city council during Monday’s meeting, in a public comment session that lasted nearly an hour.

“It’s pretty obvious that there’s a citizen movement, and a growing one here, in opposition to the imposition of” the district on older historic neighborhoods in the city, said resident Les Barber during the meeting.

The proposed Pedestrian Residential zoning in the zoning update has proven to be a major focus of public comment and discussion in recent months. The district, referred to frequently as the PR, is a neighborhood area located in a rough donut around the downtown. The proposed area is bordered by Poe Road to the north, Napoleon Road to the south, and on the east largely by Enterprise Street. To the west, it is substantially bordered by Maple Street, but it also extends to include portions along Eberly and Gorrell avenues.

Among the Pedestrian Residential district’s major features is that it would allow some businesses to operate within that neighborhood district, and that minimum lot dimensions would be smaller.

Resident Sandy Wicks voiced concerns that the district could hurt the downtown. She said that during the 1970s and 1980s, the downtowns of small Midwestern cities like Bowling Green were “cleaned out” by malls and big box stores – but BG avoided that fate, thanks to, among other things, the Downtown Business Association and the Heritage 2000 project.

“These things do not happen by magic,” Wicks said. “It takes hard work, new ideas and, most importantly, continued support from everyone to keep moving forward. We, as a community, must support the downtown, not pull businesses away.

“The proposed plan, which was based on larger cities such as Chicago, may be essential for Toledo and Dayton downtown redevelopment, but seems very misplaced for BG and potentially damaging to our city,” Wicks said. “Let’s rethink this plan, which, among other items, encourages the weakening of BG’s downtown, a downtown that lends character to our community and remains one of our best features.”

Penny Evans-Meyer voiced concerns that “there would be more traffic and less parking” under the PR, and that the area proposed to become the PR “already has a strong connection to downtown businesses. Residents can support local shops easily every day on foot.”

Steve Ricard raised the issue of property values, saying that anytime a community makes a change, the conversation of neighbors turns to whether it will help or hinder values.

“This change that is being proposed, I have not been able to see in any publication how that would improve the value of my home,” he said. “Everybody here who owns their own home is asking the same question: ‘Will this be a help or a detriment to my bottom line?’”

“I’m not in favor of this new Pedestrian Residential code, and I think it’s a bad idea,” said John Sampen. “If, however, council thinks it’s a good idea to have a PR district, I think we should share this with the whole city,” including the Stone Ridge and Westgate neighborhoods, he said.

“Many proposed changes for the so-called Pedestrian Residential district are drastic” and could lead to the deterioration of historic neighborhoods, said Anesa Miller. “Is the goal of density worth blocking the facades of historic buildings from view?”

Vassiliki Leontis echoed the sentiment that the district is already walkable, and suggested that “if you want to raise the value of that district without necessarily making it PR, all you need to do is have transit, public transport, coming from other areas.

“We have a beautiful courthouse,” she added later. “Do you feel comfortable with businesses infiltrating the residential areas all around the courthouse” and creating noise and light pollution issues, and trash?

To improve walkability, David Drain suggested burying aerial cables around the courthouse and fixing the sidewalks. “There are chunks of sidewalks missing on Enterprise and Summit street, just gone,” he said. “There are many easy things we could to do make it a better neighborhood.”

“With increased businesses, density of housing, parking is going to be a problem,” said Rose Drain. “We want to make our community bikeable and continue to have it be walkable, and yet I think bringing in a density of businesses and more housing is going to take away from that.”

Why, she said, would they consider adopting the PR, which would allow businesses on street corners, “when we are trying to keep our downtown viable? Why siphon business away from the part of town that is lovely-looking and needs more support from shoppers?”