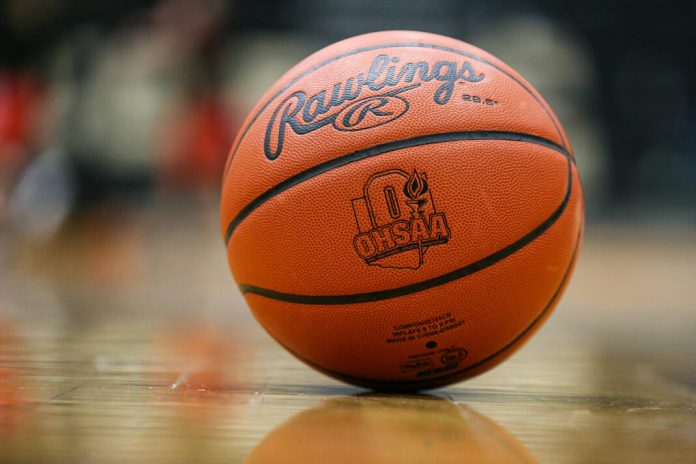 PEMBERVILLE — Case Boos scored 20 points and Noah Smith added 18 as Eastwood came back in the second half to defeat Oak Harbor, 60-48, in non-league basketball Saturday.

Oak Harbor led 16-14 after one quarter and 31-29 at halftime, but the Eagles tied the game at 36-36 entering the final quarter, then outscored the Rockets 24-12 in the final stanza.

Eastwood stays unbeaten at 3-0 while Oak Harbor has not won in four games.

In the fourth quarter Boos hit three shots from beyond the three-point arc and Smith hit one, plus the Eagles were 6-for-8 from the free throw line down the stretch.

Ethan Stokes had a game-high 26 points for Oak Harbor, including three treys and he was 7-for-8 from the charity stripe.

ELMORE — Lake trailed by just 17-14 after the first quarter but got outscored 17-7 in the second quarter as Woodmore defeated the Flyers, 66-57, in Northern Buckeye Conference boys basketball Friday.

Woodmore is 1-2 overall and 1-1 in the NBC while Lake remains winless in three games, including two league games.

For the Wildcats, Luke Morris and Brady Thatcher scored 25 and 20 points, respectively, as they combined to hit four three-point shots and make 9-of-12 free throws.

Matthew Perry, Carter Behlmer, and Drew Tajblik added two points each for the Flyers, who had six treys and were 11-for16 from the line.

TONTOGANY — Otsego fell to Evergreen, 38-22, Saturday in non-league girls basketball. The Knights fall to 1-5 while the Vikings are 5-1.

The Titans led by just 2-1 after the first period but scored four second period goals to pull away. St. John’s improves to 5-3 overall and 2-0 in the Red Division while Perrysburg drops to 2-5-1 and 1-2.

Perrysburg goals were by Cody Schneider unassisted in the first period and Caden Seiple scored in the second period, assisted by Jackson Baltzell.

Forwards Nate Barrett and William Lowery had two assists apiece and defenseman Bracken Buck and forward Justy VonLehmden had one assist each for the Titans.

Bowling Green and Walsh Jesuit played to a 0-0 deadlock for 40 minutes of hockey Saturday at Bowling Green State University’s Slater Family Arena, but it was not enough for the Bobcats.

Walsh Jesuit scored four goals in the final five minutes to defeat the Bobcats, 4-0, in a non-league game. The Bobcats fall to 4-5-1.