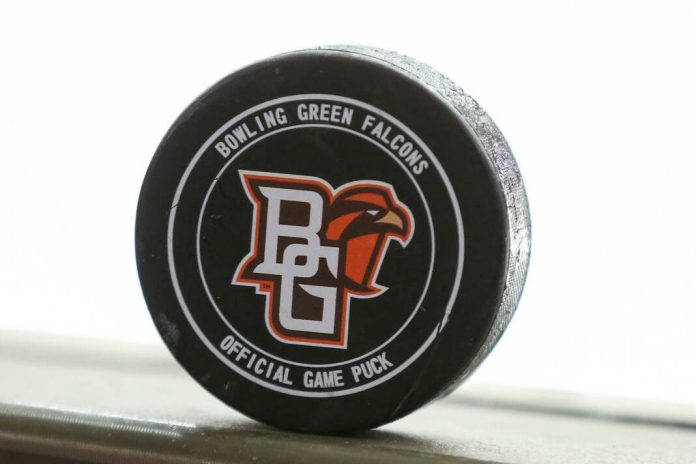 The Falcons wasted no time getting on the board, scoring 31 seconds into the game. Lake Superior State looked to center the puck as they entered their zone, but Hunter Lellig forced a weak pass that was intercepted by Alex Barber. He sent it off the boards to Nathan Burke, who skated down the right side of the zone. His cross-ice pass went inches past the outstretched stick of a Laker, finding Taylor Schneider. He controlled the puck and sent a shot into the top of the net, giving Bowling Green an early lead. Burke and Barber had the assists.

Lake Superior State knotted it 6 1/2 minutes later. They took advantage of the game’s first power play, working the puck out of the corner and keeping it in the zone. Jack Jeffers sent it along the blue line to Jake Willets, who fired from the point. The shot was redirected by Jared Westcott, who was positioned just right of the crease. Willets and Jeffers were credited with the assists.

A couple minutes later, Bowling Green regained the lead. Austen Swankler’s centering pass was intercepted by a Laker, but Chase Gresock was able to swipe it back and fire a shot from between the circles. It flew above the left shoulder of goaltender Ethan Langenegger, giving the Falcons a 2-1 less than ten minutes into the game.

Late in the first period, the Lakers killed a penalty, returned to full strength, and evened the score. Willets brought the puck through the neutral zone as the Falcon power play expired, then fed it to Jacob Bengtsson as he skated into the offensive zone. He skated to the left circle then passed it back to Logan Jenuwine, who lit the lamp with a wrist shot from between the circles.

In the final minute of the first, Bowling Green responded with a Taylor Schneider goal. Brett Pfoh took the puck to the corner, then flicked it over to Schneider. His diagonal pass found the stick of Anton Malmstrom, who dumped it to the bottom of the zone. It deflected perfectly off the end boards, skittering to Schneider as he crashed the right side of the crease. He knocked it in despite heavy contact from behind him, giving the Falcons the lead once again.

Then, the Falcons scored less than a minute into the frame. Hunter Lellig passed it from behind the BGSU net to Taylor Schneider in the neutral zone. He gave it to Nathan Burke, who entered the zone on the left boards and pushed it back to Schneider. He took a shot from the top of the left circle, which rebounded directly to Alex Barber. The captain sent it past Langenegger, who had not yet retrieved his stick after it was knocked loose during the previous possession.

A few minutes later, the Lakers won a neutral zone faceoff and scored again. Louis Boudon won the faceoff, then obtained the puck from Brandon Puricelli. His shot from just left of the right circle found twine, with Puricelli earning the lone assist.

The offensive outburst continued for BGSU. A scramble in the left circle saw the puck trickle back to Ben Wozney, who spun and passed it to Max Coyle. His shot from the right side was saved by Langenegger but deflected nearly six feet high. Brayden Krieger swung at it as it fell to the ice, connecting and sending it into the net for the Falcons’ fifth goal.

After a long stretch of no goals, both teams scored in the final two minutes of the middle period. The Lakers brought themselves back within one with a goal from Timo Bakos. He received the puck from Westcott, who patiently skated along the right side as his teammates entered the zone. His pass hit Bakos, who went five-hole for the goal.

In the closing seconds of the second, BGSU extended the lead back to two with an Anton Malmstrom goal. A collision in the corner saw the puck squeezed out to Adam Pitters, who circled the net and pushed it up to Malmstrom. His one-timer from the left dot went through to close another frantic offensive frame.

The third period saw only one goal, a power play score from Ethan Scardina. Ben Wozney made a cross-ice pass, hitting Austen Swankler in the corner. He pushed it back to the blue line, finding Dalton Norris for a one-timer. The shot sailed wide and was collected by Ethan Scardina in the left corner. He skated to the left dot, hesitated, then rifled a top-shelf shot for Bowling Green’s season-best seventh goal.

Taylor Schneider scored two goals and had an assist, marking his team-best second three-point game of the season. He also leads the Falcons in multi-point games (4) and multi-goal games (2) this season, as well as career multi-point games (21). This year, the senior has four goals and six assists for 10 points. In the last six games, he has seven points (3G-4A).

Schneider has 37 goals and 56 assists for 93 points in his career. He leads active Falcons in assists and points and is the NCAA’s active leader in games played (161). Entering the weekend, he ranked 15th in points and 17th in goals and assists among active players.

Nathan Burke notched a pair of assists, marking his first career multi-assist game. This was Burke’s second multi-point effort of the season and seventh of his BGSU career. The senior has four assists and nine points this season, 11 assists and 32 points as a Falcon, and 26 assists and 60 points in his collegiate career. In the last six games, he has eight points (5G-3A).

Malmstrom recorded his second goal and second assist of the season, giving him four points. This marked the first multi-point game of the junior’s career. The assistant captain has six goals and five assists for 10 points in his career.

Alex Barber scored his third goal of the season, giving him seven points this season. The captain has 38 goals and 92 goals in his career, ranking second among Falcons in both categories. Entering the weekend, he ranked fourth among active NCAA players in games played at 156. He was also among the career active rankings in goals (12th) and points (14th). In the last six games, Barber has six points (2G-4A).

Brayden Krieger scored his first goal of the season and second of his career. The sophomore has six points this season, matching his total from last season. Like his lone goal of the 2021-22 campaign, this was a game-winning goal.

Scardina scored his team-best fourth power play goal of the season, giving him seven goals total. This is the second-highest number on the team and gives the junior eight points. In his career, the forward has 13 goals and 22 points across 62 games. Six of his goals have come on the power play.

Swankler notched his sixth assist of the season, giving him a team-high 14 points. The sophomore has 24 assists and 40 points in his 51-game career. This marks the sixth consecutive game the forward has tallied a point. His assist came on the power play, giving him a team-best five power play points (2G-3A).

Max Coyle logged his seventh assist of the season, the most among Falcon defensemen. The assistant captain has eight points this season and 14 as a Falcon. This was his 12th assist in BGSU colors and 16th in his collegiate career. The senior has played 106 college hockey games, totaling 18 points.

Adam Pitters earned his second assist of the season, giving him four points. In his career, the senior has 14 assists and 20 points in 87 games.

Wozney tallied his fourth assist of the season. This matches the defenseman’s assist total from last season. The sophomore has eight points in 51 games, all coming on assists.

Dalton Norris also tallied his fourth assist of the year, giving him the lead among freshmen. This marked the third Norris assist that has come on the power play.

Brett Pfoh also registered his second assist, which also gives him three points. The freshman has tallied a point in each of the last three series openers.

Zack Rose played his first game since Oct. 13, spending the entire game in net. He made 23 saves and earned his third win of the season, giving him 18 wins in his career.

There were 13 different players scored at least one point, matching the previous season-high set against Michigan Tech on Nov. 5.

Bowling Green’s seven-goal total is the highest since Dec. 6, 2019, when they scored nine times against Alabama Huntsville.

Lake Superior’s power play goal snapped a streak of 23 consecutive penalties killed by the Falcons. The Lakers had four more power play chances on the night, all of which went scoreless.

“We’re really happy to see Zack Rose back in the net and get the win. We did some good things with the puck and scoring seven goals is certainly a positive,” said BGSU head coach Ty Eigner.

The Falcons and Lakers complete the series tonight at 6:07.