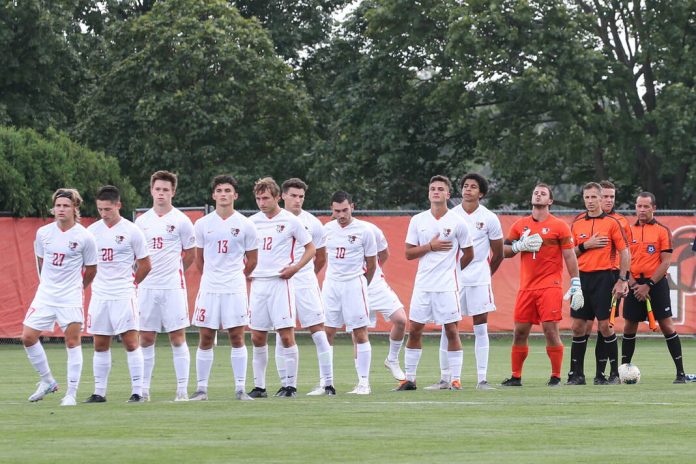 Bowling Green State University’s men’s soccer is set to join the Missouri Valley Conference as an affiliate member beginning with the 2023-24 season.

The move to the MVC comes on the heels of the Mid-American Conference suspending sponsorship in men’s soccer following the close of the 2022 NCAA Division I men’s soccer championship.

Northern Illinois and Western Michigan will join Bowling Green in the Missouri Valley Conference, giving the league 10 members in men’s soccer. Belmont, Bradley, Drake, Evansville, Missouri State, SIU Edwardsville and UIC currently make up the MVC in men’s soccer. The regular-season scheduling model and tournament format for 2023 will be announced at a later date.

“I am really excited about this move into the Missouri Valley,” said BGSU head men’s soccer coach Eric Nichols. “It is obviously sad to say goodbye to the Mid-American Conference, but this is an incredibly positive move for our program. It has been a struggle to get the programs needed to sustain a viable conference, the Missouri Valley has stability with quality programs from top to bottom. This is an exciting time for our program, and I am eager to lead us forward as we navigate these new opportunities.”

“BGSU is proud that our men’s soccer program has been part of the amazing tradition of success within the Mid-American Conference,” said BGSU Deputy AD/SWA Stacy Kosciak. “Although we are sad that the 2022 season will close a chapter on competing within the MAC, we are excited about our next chapter as we head to the Missouri Valley Conference. As we explored our options, it was important that we found a conference that matched our profile for our soccer program, and we have found that in the MVC. This transition will provide conference stability for our program, and we look forward to the opportunities this move will provide.”

The 2022 season marked the 59th year of BGSU men’s soccer. Legendary coach Mickey Cochrane initiated varsity programs in both soccer and lacrosse at BG in 1965, after serving as club coach of both sports at the University the previous year.

Through the 2022 season, BGSU has an all-time varsity record of 481-403-99. The Falcons have earned four MAC regular-season titles, most recently in spring 2021. BG captured three-straight MAC Tournament titles from 1995 through 1997, and the Falcons made 10 appearances in the league tournament final.

BG has made eight appearances in the NCAA Championships, most recently in fall 2021. The Falcons advanced to national tournament play in both the spring and fall 2021, advancing to the second round last fall.

The MVC has sponsored men’s soccer since 1991 and is conducting its 32nd postseason conference championship this weekend. Nationally ranked Missouri State will face Evansville in the title match Sunday. Notably, the MVC has four teams ranked in the latest United Soccer Coaches West Regional rankings. Missouri State is No. 3 in the region, while Belmont sits at No. 5, Drake No. 7 and Evansville No. 9.

“These additions will not only enhance the student-athlete experience for all participating, but it will establish the MVC as one of the top conferences in the country for men’s soccer and strengthen its footprint in the Midwest,” said MVC Commissioner Jeff Jackson.