Robby Rothenbuhler added a 27-yard field goal with 4:07 remaining in the first half, plus he added both conversion kicks. Rothenbuhler’s FG capped a 13-play, 65-yard drive.

Boos scored the Eagles’ final TD on a 16-yard run with 14 seconds remaining in the game. He also completed one of three passes for 16 yards. Kaiden Sanchez had the pass reception for the Eagles.

For O-G, Landon Morman had 12 carries for 33 yards and Cy Rump had five carries for 16 yards. At QB, Morman completed 10-of-25 passes for 107 yards with two interceptions by Boos and Reynolds.

DUBLIN — Perrysburg scored two fourth quarter touchdowns, but it was too little, too late, as the Yellow Jackets fell to Dublin Jerome, 24-21, in both teams’ season opener Friday.

Perrysburg opened the scoring on a two-yard run by quarterback T.J. Takats early in the second quarter.

Jerome scored 24 unanswered points through the third quarter until Takats threw a seven-yard scoring strike to Jack Borer 47 seconds into the final quarter.

Takats and Borer hooked up again for a 78-yard touchdown pass with 9:30 remaining. A.J. Bibb added the conversion kicks on all three Perrysburg scores.

Takats completed 18-of-28 passes for 229 yards without an interception and he ran for 48 yards on 13 carries.

Perrysburg running back Connor Walendzak ran for 47 yards on 14 carries and he caught two passes for eight yards.

Borer caught 10 passes for 190 yards, Gavin Fenneken had three receptions for 18 yards and Andrew Hunt had two catches for 12 yards.

Jerome held a slim 330-326 advantage in total yards and each team had 18 first downs. On defense, Hunt had the game’s only sack, good for a five-yard loss.

Jerome quarterback Zakk Tschirthart completed 18-of-27 passes for 201 yards, running back Luke McLoughlin ran for 140 yards on 23 carries and three TDs and receiver Zach Thomas had six catches for 92 yards.

SWANTON — Rossford senior quarterback Alex Williams completed 19-of-29 passes for 217 yards and two touchdowns, plus he ran for three touchdowns in leading the Bulldogs to a 34-0 rout over host Swanton Friday.

Williams had TD runs of 6, 4, and 39 yards with Jonah Shafer adding the conversion kick on four of the five TDs.

Williams ran for 117 yards on 14 carries on his way to providing 334 yards of total offense for the Bulldogs.

Morrison caught 11 passes for 154 yards, Brenden Revels caught three passes for 25 yards, and Ellison had two receptions for 20 yards. From his defensive back position, Morrison also had an interception.

Rossford had 360 total yards of offense and held Swanton to 35, including a 217-9 yard advantage in passing. Rossford had 18 first downs to Swanton’s two.

BUCYRUS — Otsego senior running back Blake Steele ran for nine yards with 9:10 remaining in the game to break a 12-12 tie and give the Knights a season-opening 18-12 road victory over Wynford Friday.

Otsego fell behind 12-0 but scored three TDs unanswered for the come from behind victory. Junior quarterback Devin Farley scored on a 46-yard run and Farley threw a 71-yard TD pass to junior wide receiver Jack Simpson to tie the score.

Despite five touchdowns combined by both teams, neither team managed to convert on an extra point, including two Otsego kicks that were blocked.

Steele also had 24 yards rushing on seven carries and he caught two passes for 24 yards.

Otsego outgained Wynford in total offense 353-314 and each team had 14 first downs and one defensive fumble recovery.

Northwood opened with a two-yard touchdown run by Zaegan Byington, a seven-yard TD run by Montay Coleman and a 24-yard run by Coleman for six points.

Byington added all three two-point conversion runs as the Rangers opened a three-touchdown plus six-conversion point lead with 2:40 remaining in the first half.

However, Seneca East battled its way back taking the lead for good with 6:41 remaining in the game.

Northwood would get its final TD on a nine-yard pass from Brandon Mielke to Alex Howe.

Mielke completed 9-of-19 passes for 147 yards, including three completions to Coleman for 73 yards. Coleman ran for 57 yards on seven carries and Byington ran for 54 yards on 20 carries.

The Rangers had a 346-323 advantage in total yards and Northwood’s defense also had two interceptions and one fumble recovery. Northwood had 17 first downs to Seneca East’s 10. 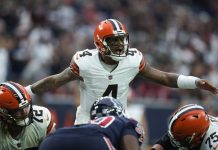 Watson must improve quickly for Browns to make playoff push