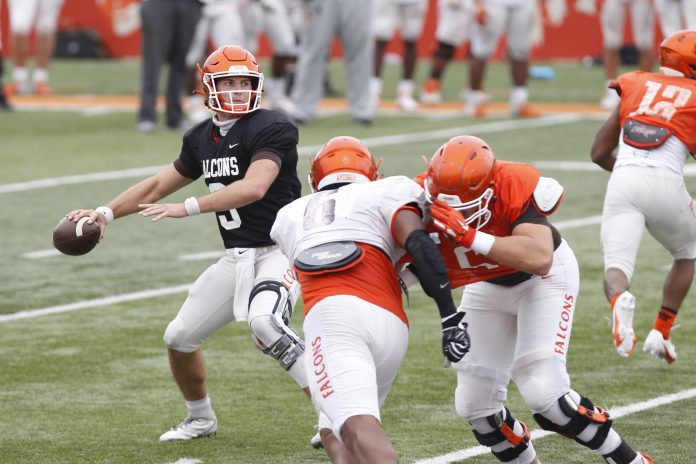 There is no question about it, the Bowling Green Falcon football team has numerous young players getting
ready for the season opener against the University of Toledo on Nov. 4.
“We have got such a (lot) of young birds out there right now and it’s youth everything. Youth on the
offensive line, youth at the wide receiver position,” BG head coach Scot Loeffler said today after
practice. “That’s going to be the story for us for a little bit here. We are going to have a bunch of
young players.
“Defensively we are young over there,” he continued. “We are learning how to play. It’s a whole new
secondary and they have got a lot of youth playing (on) the defensive line.”
Loeffler went on to say that many of the new players are going to get playing time during the six-game
regular season schedule.
“The five that we brought in are really good players and we are going to bring in three to four more next
year. We have got to build that position,” Loeffler said about the offensive line. “We have no choice
this year. … They are not ready, but they are talented and they are going to learn on the fly.”
Loeffler said the defensive line also needs to improve.
“When Bowling Green has been right and when they have won here, the offensive line has been really good
and so has the defensive line,” Loeffler said. “We are still not there yet. But the positive is that
there is some youth that we think is very talented.
“They need to get bigger, stronger. They will have to go through some growing pains, no questions about
that.”
The coaching staff is working hard with the young players every day.
“Oh my gosh, we are learning every minute of the day right now. It’s not boring, let’s just put it that
way,” Loeffler said. “You are coaching a thousand miles an hour all the time because there is so much
youth.
“There is nothing that you can take for granted right now,” he continued. “We will go through some
growing pains, there is no question about that.”
With the opening game being against arch-rival Toledo, the Falcons will be tested, especially after
stunning the Rockets 20-7 last season. This year is the first time since 1919 that BG and UT are playing
in the opening game of the season.
“We know they are a great program. We have got respect for them,” Loeffler said about Toledo. “We have to
go play our tails off and play our very best game to beat them. We know that they are going to bring
their A game.
“I am sure they did not play as well as they wished last year. They will be hungry for it,” he added
about UT. “We have got to play our very, very best game. We have got to be smart with the youth we have
and what we’re going … It’s going to be interesting.”
“The older guys understand it. The younger guys are learning it, there is no doubt about that.”