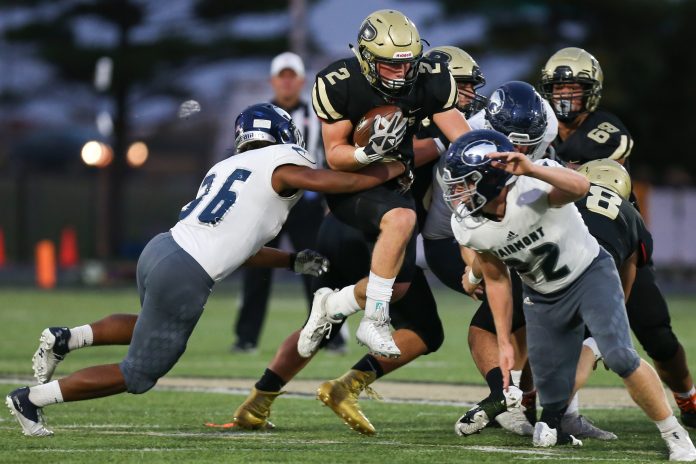 PERRYSBURG – Kettering Fairmont played a very solid offensive game along with an outstanding defensive
effort on the way to a 41-14 victory over Perrysburg Friday night in a Division I playoff game.
The Yellow Jackets were 6-0 coming into the game and Fairmont was 2-4.
“Coming in we knew both sides of the ball of their line is exceptional. We knew we were going to have
trouble,” Fairmont head coach Dave Miller said about Perrysburg, “The O-line did a nice job of opening
up stuff for the guys. We executed very well at times.
“For us to be able do that against a really good defense that was really positive.”
The Yellow Jackets played without senior quarterback Christian Gulgin who has been under quarantine after
a trip to the dentist. Gulgin had thrown for 687 yards and rushed for 170 yards this season.
“It was absolutely no fault of his. It was just dumb luck,” Perrysburg head coach Matt Kregel said about
Gulgin.
Sophomore Thomas Takats was the Yellow Jackets quarterback.
“I would like to have our senior quarterback, but we didn’t,” Matt Kregel said. “The sophomore kid played
his butt off. He played a great football game.
“Our thing all year has been physically, run the ball and gain yards on the ground and they stopped us.”

While the Firebirds offense was putting together touchdowns, their defense played very well especially
stopping Perrysburg running back Connor Walendzak, who came into the game with 980 rushing yards and 13
touchdowns.
“He’s a good runner and with that offensive line. … He’s an animal,” Miller said about Walendzak. “Our
guys held up pretty well.”
On a Perrysburg fumble, Fairmont’s Dalton Gustwiller picked up the ball and ran 12 yards for a touchdown
just nine seconds into the game. Will Holt kicked the PAT for a 7-0 lead.
“It was huge, huge. They (Perrysburg) have not been down. I think that probably messed with their psyche.
Especially with a sophomore quarterback,” Miller said.
“Just one sophomore mistake for game,” Kregel said. “You have got to keep the ball close to your chest
when you are in traffic and he didn’t. He was trying to wave the ball around and make something happen.
You can’t go down to 7-0 to a triple-option team.”
The Yellow Jackets countered with a 16 play 88-yard drive talking 6:43 off the clock. Walendzak scored on
a 10-yard run and Jason Hudson kicked the PAT to tie the game at 7-7.
“They came right now the field and answered. It was really important for us to come back and do the
same,” Miller said.
The Firebirds quickly countered on a halfback pass. Keon Wright hit Anas Musaimi who rolled 67 yards for
a touchdown. Holt kicked the PAT to make it 14-7 and Fairmont never trailed.
Fairmont’s defense held on Perrysburg’s next possession and the Firebirds used seven plays to cover 57
yards in 3:34 to score. Tank Gant scored on a 1-yard run and Holt kicked the PAT with 11:13 left in the
first half.
Fairmont held on the ensuing possession and used five plays to cover 77 yards in five plays taking 4:18
off the block. Wright scored on a 43-yard run and Holt’s PAT make it 28-7 with 6:55 remaining in the
half.
The Yellow Jackets moved to the 17-yard line on the next possession, but an incomplete pass on fourth
down stopped their attack.
“I’m stunned with how we played in the first half.” Kregel said. “We haven’t done that this year.
“They (Fairmont) are really good at what they do and I think our kids let it snowball on them a little
bit,” he continued. “By the time you snap out of it with what they do as a scheme, its really hard to
get back into it.”
The Yellow Jackets scored on their first possession of the second half using nine plays to cover 62 yards
in 2:24. Takats passed to Walendzak for a 23-yard touchdown going down the sideline. Hudson kicked the
PAT to make it 28-14.
Fairmont’s Drew Baker closed out the scoring on runs and 30 and 2 yards. Holt made one of two PATs for
the 41-14 margin.
“They executed things. They have not caught three passes in three games and all of a sudden they execute
something in the passing game,” Kregel said. “They played a great football game and our guys didn’t
respond.”
Fairmont rushed the ball 38 times for 226 yards and four touchdowns to go with 3-for-3 passing for 141
yards and a touchdown.
For the Yellow Jackets, Takats was 14-of-26 passing for 195 yards and a touchdown with Aidan Pratt making
five receptions for 56 yards. Walendzak carried the ball 17 times for 47 yards, passing the 1,000-yard
mark for the season.
KETTERING FAIRMONT 41, PERRYSBURG 14
FAIRMONT – 14 14 0 13 — 41
PERRYSBURG – 7 0 7 — 14
F – Gustwiller, 12 fumble return (Holt kick)
P – Walendzak, 10 run (Hudson kick)
F – Musaimi, 67 pass from Wright (Holt kick)
F –Gant, 1 run (Holt kick)
F – Wright, 43 run (Holt kick)
P – Walendzak, 23 pass from Takats (Hudson kick)
F – Baker, 20 run (kick failed)
F – Baker, 2 run (Holt kick)