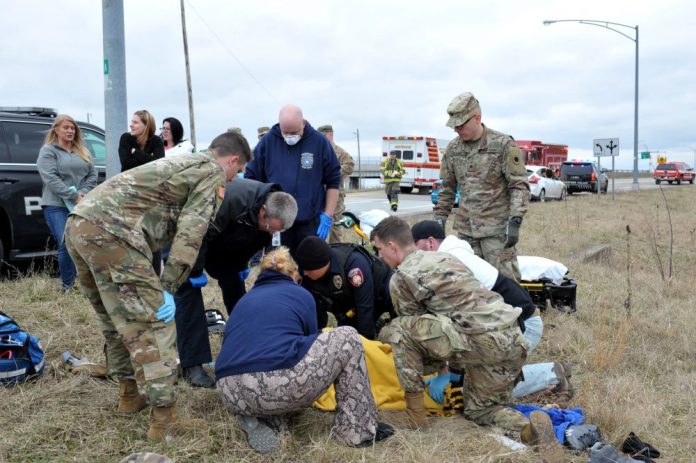 ROSSFORD — Adrenaline and training kicked in for five members of the National Guard as they helped out
with a medical emergency that was part of a single car accident.
The five soldiers were returning to the National Guard Armory in Walbridge on Monday, when they witnessed
a red GMC Terrain SUV veer off Interstate 75, just before the Wales Road exit.
“She just started ramming these orange construction barrels,” Spc. Isaiah Clark said. “It drifted off the
side of the road to a hill with a patch of rocks. She got air when she went over that hill, and she
landed in kind of a ditch. That’s where the car rested and finally came to a stop.”
Spc. Aaron Gelb worked with Spc. Austin Tolles to enter the SUV through a window and put it in park. They
then worked to remove the woman, with the help of Pfc. Nick Schuerman.
Schuerman described the woman as being unresponsive with blue lips and blue skin.
Spc. Michael Flipse helped Schuerman and Clark pull the woman to safety.
“We got her out of the car and put our training into use. She was kind of seizing and unconscious the
whole time,“ Schuerman said. “Our training just kind of took over. … We had practiced basic medical
procedures for a combat scenario and applied it to a victim in a car. Instincts kind of kicked in.”
Some civilians arrived on the scene to help and called emergency services while the five guard members
worked.
“We got her to regain consciousness on the side of the highway and she was taken to the hospital,”
Schuerman said. “There was a lot of adrenaline.”
They knew the woman could be seriously injured.
“Just by looking at her it was clear she was not conscious. She was not responsive,” Clark said. “She was
thrashing around pretty bad and we didn’t know what was going on. … When EMTs and police arrived they
took over the line of investigation.”
The driver received two citations for failure to control and operating a vehicle without a license, and
was taken by the Northwood EMS to St. Charles Hospital, Oregon.
“Our training 100% took over. This is what we train for. This is part of the reason I joined the National
Guard, not only to serve the country, but to serve my community. That’s exactly what we did. We helped
out in any way we possibly could,” Clark said.
“The soldiers’ quick actions had a significant impact on the outcome of the incident,” said Rossford
Police Chief Todd Kitzler. “Their willingness to put themselves in danger to assist a person in need on
a busy interstate highway is a credit to their profession.”
Rossford police officer Wesley Socie was the first officer on the scene, but it took place in the
Northwood jurisdiction, which took over the case.
“There is nothing more valuable to the safety and security of our communities, state and country, than
having citizen-soldiers, airmen, sailors and Marines willing to go above and beyond to assist in
emergency situations,” said Kitzler, who is an Army and Ohio National Guard veteran, serving from
1986-96.
The five soldiers are part of the Ohio National Guard’s HHC 1-148th Infantry Regiment — 37th Infantry
Brigade Combat Team.
“They did good. They were very excited to help,” said Northwood Fire Chief Joel Whitmore. “They had just
just been called up for active duty, to help out with the coronavirus stuff, and they get to help out in
an accident. They did good.”