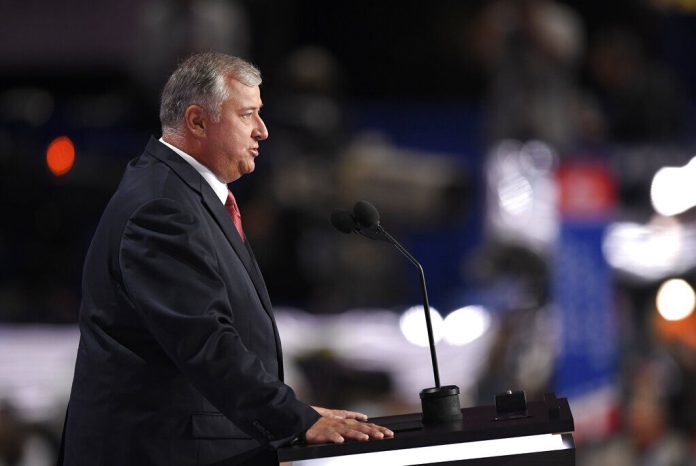 COLUMBUS, Ohio (AP) — Tension was thick in the air. After 10 consecutive votes in which another man had
garnered more support than Larry Householder’s favored candidate to be the next Ohio House speaker,
Householder leaned back quietly in his chair, arms confidently propped behind his head.
As usual, he was playing the long game.
The Republican now accused in a $60 million federal bribery probe had contributed to a monthslong impasse
over the speakership that brought Ohio lawmaking to a standstill in 2018 and left a trail of
intimidated, disheartened representatives in its path.
The previous House speaker had resigned amid scandal. Householder wanted a proxy in the job until he
could run for the full two-year term himself a few months later. Even if his man lost now, though, he
was counting votes and sizing up loyalties for the future as the roll was taken again and again.
The leading candidate, then-Rep. Ryan Smith, became speaker that day on the 11th vote. But Householder
would take the job six months later with crucial support he had lined up — from Democrats. With promises
of bipartisan cooperation, the master dealmaker had once again gotten what he wanted.
"Either over the last 18 years, this dais has gotten smaller or I have gotten larger,"
Householder, who had put on a few pounds since last serving as speaker from 2001 to 2004, quipped in his
slight southern Ohio drawl as he took the gavel.
His triumphant return had been achieved, a feat federal prosecutors now say was fueled by millions of
dollars of bribe money funneled to Householder and his associates for the passage of a nuclear bailout
bill he would champion soon after his ascendancy.
According to the criminal complaint, Householder and his associates spent the money to boost themselves
politically and personally, to stage often nasty campaigns to elect Householder loyalists, to buy votes
for the bailout bill and to poison subsequent efforts to repeal it.
Householder, 61, was widely believed to have been positioning himself to run for governor. With a
down-home demeanor and a degree in political science, the farm kid and one-time insurance agent has the
rural Appalachian profile that tends to work with Ohio voters. Two icons of Ohio politics — four-term
governor James Rhodes and Democrat Vern Riffe, the battleground state’s longest-serving House speaker —
were from the same eastern Ohio region.
Dressed in full camo, Householder declared himself "a pro-gun, pro-life, Christian
conservative" in a sharply produced 2018 campaign ad in which he shot a television set with a
rifle. He’s a Trump supporter who clashed with GOP Gov. Mike DeWine over wearing masks to curb the
spread of the coronavirus, refusing to don one until after his arrest Tuesday, when he wore a mask as he
exited the federal courthouse.
Republican Richard Finan, who was Ohio Senate president when Householder was last speaker, remembers
Householder being under the cloud of a different FBI investigation when he left office due to term
limits in 2004.
"I was not surprised," Finan said of Householder’s arrest. "My dealings with him when I
was there were not good."
The earlier probe resulted in no charges and was ultimately dropped, but Finan said he was questioned by
the FBI. It stemmed from allegations of heavy-handed fundraising tactics used by Householder and his
team, including aides who had authored a secret memo outlining a plot to "dismantle" the
political career of then-Secretary of State Ken Blackwell, a Black Republican whose rising political
star stood to outshine Householder’s.
Finan has a vivid memory of participating in hourslong budget negotiations with Householder and then-Gov.
Bob Taft, all three Republicans, as they tried to resolve a $1.5 billion shortfall back in 2001. Finan
said the deal was finally hammered out around midnight and Taft suggested the "Big Three" go
out into the hall as a group and tell the press.
"We walked out the door of the governor’s office, I turned around and looked for Larry. He wasn’t
there. He had gone out the back door," Finan said. "He went back over to the House and the
next day he announced a totally different proposal supported by the OEA."
The Ohio Education Association is the state’s largest teachers union, a generous political player. Ohio
is a closely divided state when it comes so politics, so not everyone saw that 2001 school-funding deal,
which ultimately went nowhere, as a negative.
Bill Phillis, an education lobbyist who helped negotiate it, said he didn’t have a problem with
Householder bucking fellow Republicans. In Householder’s nearly two-decade absence from the Statehouse,
the state’s unconstitutional school-funding system has never been fixed. Phillis said the speaker was
trying to spearhead a bipartisan solution.
"I’m distraught that the school funding issue is not yet resolved, and I think Larry Householder had
in mind resolving it," he said.
Householder has thus far ignored calls for his resignation from Democrats and Republicans alike. But,
with his preliminary hearing in the federal probe set for August, the long game on Householder’s policy
agenda and political aspirations is now on a different timetable.