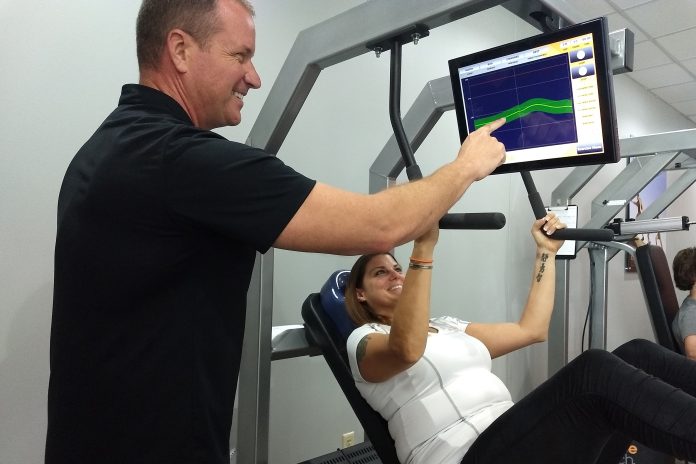 PERRYSBURG — With resolutions for improved health and fitness on the horizon, a new robotics enhanced
smart gym is the latest option for the safety and efficiency minded.
This will be the first holiday gym season for Steve Hopingardner, who opened The Exercise Coach in
Perrysburg in July.
“What we’ve done is taken the knowledge of muscle contractions and mirrored that up with some smart
technology and we’re able to get a very efficient workout in a very short period of time. It’s super
safe and super effective,” Hopingardner said.
The gym is laid out as a small fitness studio where only a few clients would train at any one time. The
equipment relies on computers and robotics instead of traditional equipment like dumbbells and
treadmills.
The training philosophy is meant to help each person get the most efficient workout and also avoid
injury.
Each new member is given a unique code when they join the gym. When they use the exercise machines, they
plug in their code to open their workout profile. The machines then adjust the resistance, for each
exercise repetition to the individual’s strengths and weaknesses in real time. The optimal resistance
for that client is displayed on a feedback screen which the client responds to with changes in the force
of their pushing or pulling. Actual force used and the machine suggested target force are both recorded
and then used to calculate the numbers for the next workout.
“It knows your strength and your range of motion, which we can set on the board,” Hopingardner said. “The
whole idea is to get those muscles engaged and keep them engaged throughout the entire range of motion.”

The machines are all hydraulic. There are no plates to move or weight stacks.
There are three different smart machines at the gym, which allow for seven different exercises. There is
a leg press, a chest press/row and a back extension/abdominal machine. There are also some more
traditional units to supplement the workout and they utilize a high intensity training concept.
“There’s no high impact. It’s very joint friendly,” Hopingardner said. “As a fitness studio we are the
only ones who have the exerbotics technology.”
Hopingardner was an Army aviation officer for 25 years. He served as a Blackhawk helicopter pilot,
commander of several units, and a combat adviser. He has been stationed throughout the United States and
Europe and deployed for multiple combat tours. His last duty station was Bowling Green State University
as the professor of military science.
While in the military he saw a lot of traditional free weight training and trained that way himself, but
also saw the inefficiencies. There was a steep learning curve for many exercises, some of which resulted
in injuries. He saw both factors keeping people out of the gym.
“I enjoy fitness and understand the undeniable health benefits from it. I was looking for a way I could
continue to serve people and share in their story of becoming healthier and happier. The Exercise Coach
was the perfect solution,” said Hopingardner.