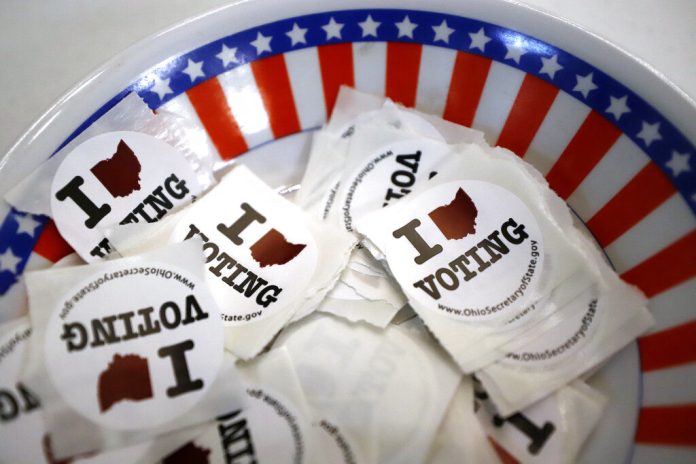 CINCINNATI (AP) — Voter participation in Ohio’s coronavirus-delayed primary election is on a slow pace
with less than week to go.
Numbers released Tuesday by the state’s election chief, Republican Frank LaRose, show that 1.67 million
people, fewer than a fourth of registered voters, had requested an absentee ballot by the end of last
week.
Since the March 17 postponement, former Vice President Joe Biden’s leading rivals have thrown their
support behind him for the Democratic presidential nomination.
Ohio doesn’t have any other major contested statewide races, but there are a handful of contested
congressional primaries, along with numerous legislative races and votes on local issues.
State authorities postponed in-person voting hours before the scheduled March 17 primary for public
safety reasons. Republican Gov. Mike DeWine said he didn’t want people to have to choose between risking
their health and exercising their constitutional right to vote.
Other states are also relying on mainly mail voting, raising partisan differences and concerns among
voting rights groups.
Ohio replaced it with voting that is nearly all absentee. There will be in-person voting April 28 that is
restricted to disabled voters and homeless people. Ballots can be dropped off at boards of election or
must be postmarked by April 27 to be counted.
Democratic ballot requests are running more than 150,000 ahead of Republicans. There were 705,478 GOP
requests.
Then-Ohio Gov. John Kasich and future President Donald Trump combined for nearly 2 million votes in the
2016 GOP primary won by Kasich.
Those who haven’t requested applications for absentee ballots yet are running out of time, though,
especially if they’re relying on mail.
"Yes, the legal deadline to request your Ohio primary ballot is Saturday at noon, but if you don’t
get your app in by Wednesday/Thursday, you’re really running the risk of not getting your ballot in time
at all," Brian Hester, chairman of the Democratic Party in Butler County posted on Twitter.
"Friendly advice: APPLY ASAP!"
___
Follow Dan Sewell at https://www.twitter.com/dansewell