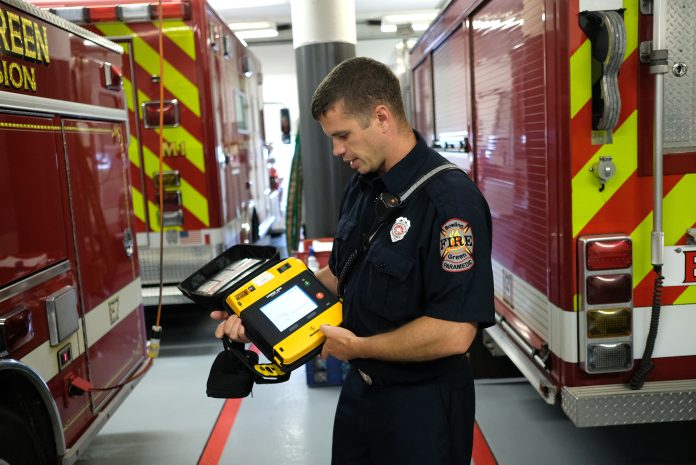 The day after the Bowling Green Fire Division announced a program to record every place in town where an
automated external defibrillator is located, the need was reinforced.
Brandon Westerman, a Bowling Green firefighter/paramedic, said the city’s three ambulances and a fire
truck were out on calls on July 17. Another emergency call came in from the Ohio Department of
Transportation on East Poe Road.
“It came in as an unresponsive person with CPR in progress,” Westerman said.
Luckily, he said, an ambulance was dropping off a patient at Wood County Hospital and sped over to ODOT.

“When they arrived, the responder there said they had been doing CPR for 4-5 minutes and delivered three
shocks with the AED,” Westerman said.
“The person had actually regained consciousness, was awake, alert and talking with them.”
The fire department is working to improve community response to out-of-hospital cardiac arrest situations
by creating an extensive database of locations of AEDs throughout the city.
Once an AED location is recorded, Westerman said it will be integrated into the computer-aided dispatch
that is used by emergency services.
When someone calls 911 and they put in a location, CAD generates a map on the computer of the address, he
said. It will automatically load any notes that are saved, Westerman said.
“If we have notes and there’s someone in cardiac arrest, they’ll be able to see if there’s an AED there,”
he said, adding that there will be detailed comments with the location description, including where to
find the device.
Westerman said dispatchers are medically trained and can walk a 911 caller through how to use it and
deliver defibrillation, which is a shock to the heart.
The campaign to locate AEDs around Bowling Green started July 16.
“Already there’s more than we thought,” Westerman said.
They include 37 on the Bowling Green State University campus and at least 40 more throughout the city.

The mapping is an inexpensive way to locate AEDs, Westerman said.
Lucas County in 2015 started using PulsePoint, an app that sends out an alert to registered users on a
smart phone when someone nearby is having a heart attack, he said.
“Citizens, if they have CPR or AED training, if there’s a cardiac arrest nearby, they can go provide
aid,” Westerman said.
He said it costs approximately $18,000 to start that program and $8,000 annually to maintain it.
“That’s ultimately a long-term goal,” Westerman said of the app. “This is kind of a low cost way to get
something similar started.”
According to the American Heart Association, there are over 350,000 cases of sudden cardiac arrest each
year in the U.S., Westerman said. Along with early recognition, notification of 911 and bystander CPR,
early defibrillation greatly improves the chance of survival and patient outcomes. These are all steps
to the out-of-hospital “chain of survival.”
“The chances of survival with a defibrillator decreases by 10% with every minute it’s delayed,” Westerman
said.
He said the fire division is also working on getting more CPR and AED training at the fire station. They
hope to offer training to the public quarterly after instructors are trained.
“We’re trying to be more proactive,” he said.
An AED can be purchased online, Westerman said, through different vendors. They range in cost from $800
to $3,000, depending on the model, he said.