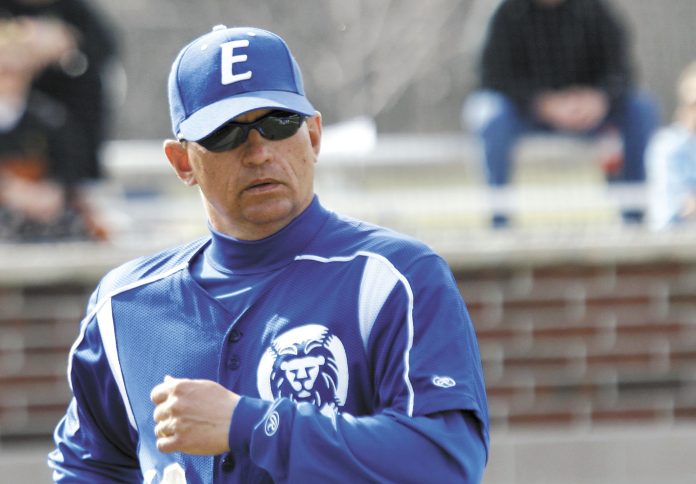 JERRY CITY – Kyle Reiser is adding to his already impressive résumé.
The Elmwood High School baseball coach has been selected for induction into the Ohio High School Baseball
Coaches Association Hall of Fame.
Reiser is 518-216 as a head coach, including a 506-204 record at Elmwood.
The Royals have won 17 league, 19 sectional, four district and one regional championship under Reiser.
They advanced to the Division III state championship game in 2007.
The 54-year-old will be inducted Jan. 16 at noon at the Hyatt Regency in Columbus as part of the
association’s winter meetings and clinics.
"I truly believe this isn’t me going into the hall of fame – it’s our program and all of the people
who have been a part of it who are going in," Reiser said.
Reiser will be in his 28th season as a high school head coach in the spring, including his 27th season at
Elmwood. He first was a head coach for one season at Tinora when he was doing his student teaching at
Napoleon and then went to Elmwood for three seasons.
Reiser left Elmwood to become an assistant coach at Ball State for three seasons before returning to
Elmwood where he’s been ever since.
"We’ve been fortunate to have good people in our program," Reiser said. "I’m more happy to
share this with our assistant coaches and players. It’s nice recognition for a lot of hard work for what
we’ve tried to do here."
Reiser’s teams have won with fundamentally sound pitching, hitting, defense and the squeeze bunt.
But as good as the Royals have been on the field, Reiser is just as proud of his program off the field.

"I always tell our kids we want to play hard and work hard," Reiser said. "But we want to
carry ourselves the right way, so people see us as a first-class group of kids wherever we go and in
everything we do."
Reiser said the Royals often receive compliments for the way they behave when they’re in restaurants and
hotels during team functions and trips.
"Those really do mean something, sometimes even more than a ‘W’ or an ‘L’ in the long run,"
Reiser said. "We always try to have a good image on and off the field. I always share those
compliments with the kids."
Reiser, who teaches computer science at the middle school, believes coaching also is about teaching life
lessons.
He remembered one player who was always late when that player joined the program. The player learned to
be on time under Reiser, and is now always early for work.
"Those kinds of lessons are important," Reiser said.
Reiser has had a number of former players return to be an assistant coach in the program, and former
Royals routinely return to Elmwood to watch games. The names of former Elmwood players are listed in the
locker room. The former players are welcome to watch those games from the team’s dugout.
"I love having them come back," Reiser said. "I love seeing them become successful adults,
successful husbands, successful dads.
"It’s nice to have the connection with the past and the tradition of our program for our current
players to see. Building relationships with your players is part of coaching."
Now, Reiser is coaching the sons of his former players. Some of the second-generation Royals already are
high school graduates.
His former players also are coaching their sons in youth baseball.
"They’re teaching them what ‘Country Hardball’ is all about," Reiser said. "They’re trying
to instill the things in their kids that we tried to instill in them as players."
Although discipline remains an integral part of the Elmwood program, Reiser has adapted to today’s youth,
who are more interested in instant gratification.
"Everybody says I’ve mellowed over the years, but things change a little when you have kids old
enough to be in athletics," said Reiser, who has four daughters. Reiser and his wife, Kelli, live
in Wayne.
"You’re able to see it from a parent perspective a little bit better. Maybe I’ve gotten smarter and
picked my spots when you need to have a confrontation, and how to handle kids better."
Reiser still enjoys seeing players develop during their four seasons in the program.
Those players typically play on the junior varsity their first two seasons, make the varsity as a role
player when they’re a junior, and become a key player and maybe an all-league player as a senior.
"They’re some of my favorite players," Reiser said. "Those kids are patient, and they kept
learning and kept after it. They were patient, and it paid off before they left. They had a goal, and
reaching it came down the road because of patience and hard work.
"Kids now sometimes look at the roster and don’t come out because they might be embarrassed by not
playing, instead of just trying to compete and beat someone else out for a spot."
Reiser,  an infielder at Eastwood High School and Bowling Green State University, resisted the chance to
leave Elmwood to coach at a bigger school.
"When I first started doing this, I liked the community as far as the values," Reiser said.
"It was family oriented. There are a lot of people who bend over backwards if we need help. It’s a
great place to raise a family.
"Once you start building something, you want to see it through. I’ve had other opportunities, bigger
schools with more kids, you don’t have to worry about numbers and the kids come to you. But I was
enjoying it here and I didn’t want to start over."
Reiser has taken on a hands-on approach with the Elmwood baseball facility. The players share in the
maintenance, and improvements are made each season. Screens in front of each dugout will be installed
for the coming season.
"I’ve always seen it as a challenge here, is to build something," Reiser said. "I don’t
ever really feel like the job is really done, whether it’s on the field or what we’re doing to improve
the field."
Reiser has no plans on retiring, although how much longer he’ll coach remains a popular question in the
Elmwood and high school baseball communities.
"As long as I’m having fun, I’m going to keep doing it," Reiser said. "There are good and
bad days, but I’ve had a lot of fun doing it and I’ve had a lot of satisfaction working with kids and
seeing them develop.
"I can’t get that anywhere else, whether it be baseball or in the classroom. I’m still enjoying
it."