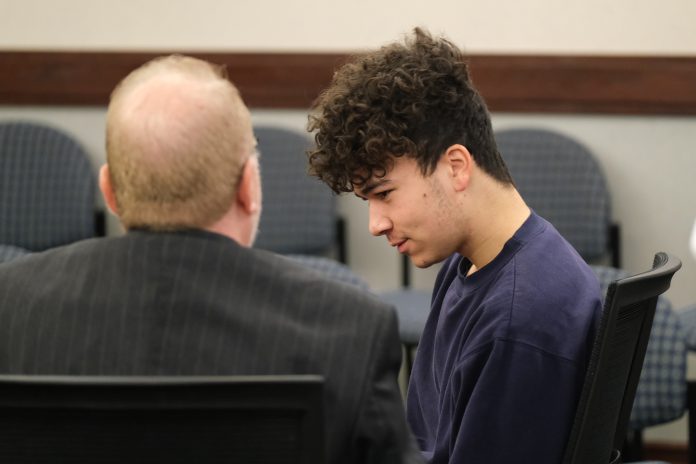 A teen accused of a fatal stabbing in Perrysburg has been indicted for aggravated murder.
Tyler Miller, 16, Perrysburg, was indicted Wednesday by a Wood County Grand Jury. He will be arraigned on
Friday at 11 a.m. in front of Wood County Common Pleas Judge Alan Mayberry, according to a release by
the Wood County Prosecutor’s Office.
According to preliminary court filings obtained earlier this week, Miller admitted to stabbing a
19-year-old Toledo man to death on Nov. 29.
Miller also allegedly made threats while in custody.
According to the papers filed from juvenile court division of the common pleas court, Miller stabbed
Amonie Ervin numerous times in the chest and abdomen inside the Ervin’s vehicle, causing serious
injuries to him.
Ervin was pronounced dead at the scene after he had exited the vehicle and collapsed on the driveway.
Miller was picked up a short time later after he had fled the scene. A knife was recovered from his
pocket and his clothing had what appeared to be blood on them, according to the court documents.
Miller reportedly admitted to stabbing the victim at least five times in the chest and abdomen. He was
upset with Ervin because he had “shorted” him twice with marijuana, the documents said.
Miller also reportedly told authorities that he intended to kill Ervin and took a knife from his kitchen
with him when he went out to the vehicle.
Miller was last a student listed in Perrysburg schools in August.
At the time of the filing he was listed in the custody of Jessie and Edna Miller of Perrysburg.
While in juvenile custody, Miller also is alleged to have been overheard by staff threatening to kill a
witness in the case.
Miller also reportedly told officials that if anyone messes with him, “it’s their life.”
He allegedly told the juvenile detention center director on Dec. 9 that he does not know why he is in so
much trouble — he has no idea why it is wrong to kill someone. At another time, when another youth in
the detention center called him a name, Miller reportedly threatened to hurt him.
He was also reportedly caught trying to smuggle a pencil in his sock into court.
Miller transferred to the Wood County Justice Center from the juvenile detention center earlier this
month. By law, he is separated from adults in the jail.
If convicted, Miller could face life in prison without the possibility of parole or life with the
possibility of parole after 20, 25 or 30 years, according to the prosecutor’s office.