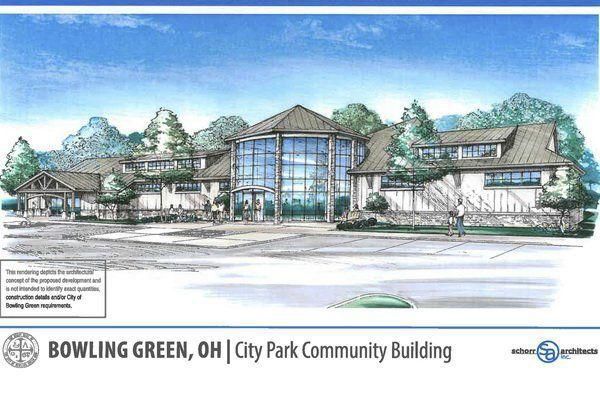 Excitement is growing among Bowling Green residents as work moves forward on the new Veterans Memorial
Building at City Park.
“They’re chomping at the bit,” said Parks and Recreation Director Kristin Otley at Tuesday’s park board
meeting.
Otley said they are having weekly meetings with the contractor, architect and engineer on the project.

“They are progressing nicely. We all could do with a little less rain,” she said. “Things are progressing
on the timeline that we have set, quite comfortable with that.”
The foundation for the building is in, Otley said.
She said that, as more work is being done at the site, she’s hearing more excitement from residents about
the project.
Some, she said, have already expressed interest in renting space for events at the building.
As a result, Otley said that she expects that, in August, the board would be presented with a potential
fee structure for rentals there.
“I think we’d be comfortable with looking at some dates starting in fall of 2020,” she said. “We would
want to have rates in place for that.”
After approval by the board, such fees are then sent on to city council for final approval.
“While we do need to charge a fee for the public to use the space, we are replacing a couple of buildings
that were extremely reasonable” to rent, Otley said.
While the price to rent spaces at the Veterans Memorial Building won’t be at the level it had been for
the former Veterans and Girl Scout buildings, it will be reasonable, she said.
“We still do want to make it so that the public is easily able to afford them.”
Also at the meeting, the board:
• Heard from Otley that the City Pool and Waterpark complex opened on Saturday and “actually had a pretty
decent weekend around the thunderstorms.” While school is still in session, the pool will be open from
4-8 p.m., and will go on regular summer hours starting Friday.
• Heard from Natural Resources Coordinator Chris Gajewicz that, with the large amount of rain recently,
Wintergarden/St. John’s Nature Preserve is “a swamp. It is just wet… It’s something that they need to
kind of expect, that water’s going to kind of lay in places” due to clay and bedrock layers not far
beneath the ground.
As a result, the front portion of the preserve along Wintergarden Road has not yet been mowed this year,
a similar situation to last year.
However, Gajewicz said the wetness hasn’t stopped park visitors from coming out, and programming at the
preserve is still taking place.
“Just make sure you wear mud boots and prepare to get wet,” he said.
• Heard from Recreation Coordinator Ivan Kovacevic that the third annual Super Dash event held earlier
this month attracted over 140 participants, up from 115 in 2018.
He also said that, for the upcoming Lunch in the Park and Concert in the Park programs, they are looking
at having a golf cart available to help transport people due to the parking situation that has been
created by the construction in City Park.