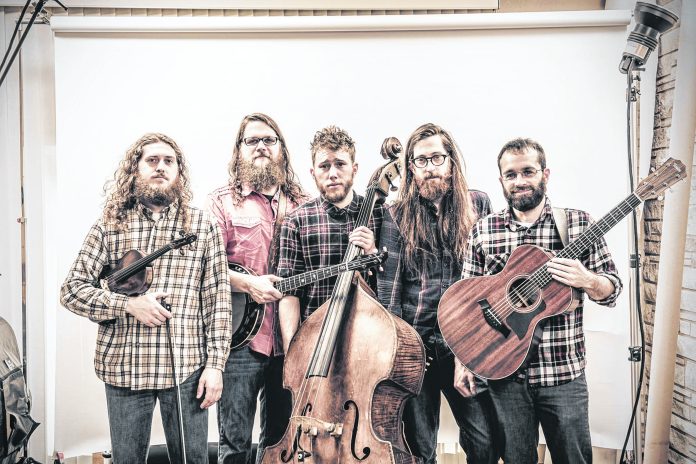 Jesse Farrar, the main bassist and vocalist for alternative string band Old Salt Union has had music in
his blood for as long as he can remember.
Coming from a long line of musicians and majoring in jazz throughout college, music is all he has ever
known, but he will be the first one to tell you that that is all right with him.
Farrar is part of a larger group called Old Salt Union that is made up of four members. Guitarist Graham
Curry, banjoist Ryan Murphey, mandolinist Justin Wallace and fiddle player John Brighton.
Old Salt Union will be
on the main stage of the Black Swamp Arts Festival on Sunday at 2
p.m.
The group grew up in the same area, and after college decided to join forces and try to create something
special.
“We are all from the St. Louis metropolitan area and some of us had played in bands prior, but all in all
I had just gotten out of college and we were just bumming around playing in different groups. Eventually
we all got together and started playing and we have been together ever since,” Farrar said.
This group of four guys that met in St. Louis prefers to be classified as an alternative string band, but
Farrar said that their music can’t be classified into one genre.
“Its kind of an eclectic mix. We like to go by alternative string band. It’s bluegrass but it is also a
mix of jazz and classical and all sorts of things of that nature. We have a high energy performance that
kind of mimics that of rock bands,” Farrar said.
The band members are excited to show off their art, in a way that Farrar believes all art should be
displayed — free to the public.
“It’s free which is phenomenal, it’s the way that art should be. I love the aspect of both visual and
sonic art combining and we are just happy to be a part of it,” he said.
While the band is a large mix of different sounds, the band still takes songwriting seriously and hopes
that this shows in their music. Overall, if the crowd is dancing and enjoying themselves, they consider
that a job well done.
“We take songwriting pretty seriously while we are this eclectic mix, we really take songwriting to
heart. We want people to dance and enjoy themselves, but we also want them to generally enjoy the songs.
If we get you dancing and enjoying yourselves then we have succeeded,” Farrar said.
Good songwriters are typically good at getting a meaningful message across and that is what they hope to
create inside a very energetic show.
“We are a string band that presents ourselves as a rock or alternative rock band. There is an intensity
in our music in getting our message across so I hope that people can enjoy a good message but also can
get their head banging a little bit,” he said.