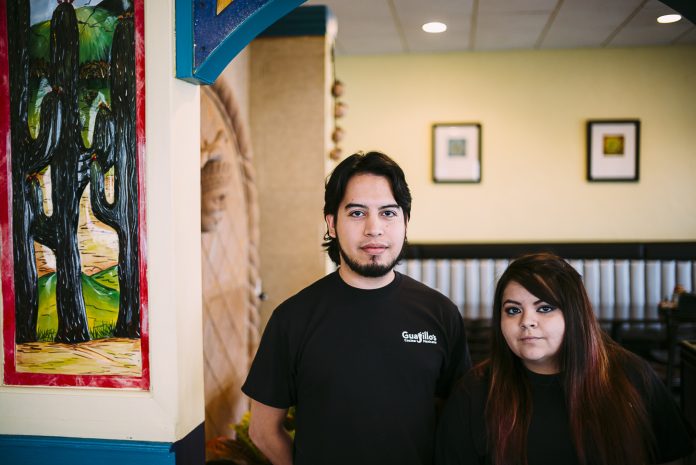 Numerous Mexican restaurants have come and gone in and around Bowling Green in recent years, but the
newest incarnation could have staying power — notably due to its connection to another successful
restaurant.
Guajillo’s is a sister to El Zarape on East Wooster Street. Guajillo’s is located at 1096 N. Main St. (in
the Kroger’s plaza).
A 15-year operation in Bowling Green, El Zarape is often filled to capacity and has to turn customers
away, according to Rebeca Olivarez, one of the co-managers of the new store. She is the sister of David
Olivarez, who operates the East Wooster Street eatery. Her co-manager is Jose Galvan, a friend and
veteran employee of the family business.
Guajillo’s (pronounced Gwa-he-yos) is named from a Mexican guajillo chili pepper. The pepper is a “tasty
and flavorful” one — not hot or spicy — according to Olivarez.
“We use the guajillo in probably 90 percent of our salsas, recipes and dishes,” she said.
This is the fourth Mexican restaurant for the family, joining operations in both Van Wert and Delphos.
Each restaurant features a sous chef, specifically trained by the same chef for all of the restaurants.

Galvan and Olivarez both said the new restaurant has a different name, despite serving many of the same
dishes as its sisters.
“We are a separate entity,” Galvan said. “We wanted to have our own personality.”
Guajillo’s has added new items to the menu with a focus on those new items being more traditional Mexican
dishes. For example, the various meat tacos are all served on soft corn tortillas.
“It’s always a moist shell,” he said.
Olivarez also described the decor as being “more chic” than its sisters.
“We’ve tried to keep a focus on simplicity, like tribes in Mexico. We have created an infusion of the
traditional street market fair in Mexico and the traditional dine-in experience.”
She said they have been working on the theme and decor in the planning stages for three years. She said
they are using a mixture of cool and warm colors for the decor, including yellow accents for the
turquoise and purple colors used. She said it resembles a hacienda-style theme
“We want our customers to feel comfortable and at home,” she said.
Olivarez said they take pride in the family aspects of the restaurant, not only the families they serve
but the use of family recipes used in many of the dishes they serve.
“These are the same soups we ate at home growing up,” she said.
Most of those soups served are from recipes from Rosa Olivarez, their mother.
“That provides a little touch of home and the customers love it.”
Among the new offerings is beef tongue.
“We had to search all over Northwest Ohio for the beef tongue,” Olivarez said.
In addition to the traditional Mexican fare, they also serve American food, including hot dogs and
cheeseburgers, especially for younger children.
Galvan noted their salsa bar which features five different varieties on a regular basis with additional
salsas and sauces used in various recipes.
The salsa bar includes a mild tomatillo roasted and an avocado based mild sauce, to a “fire sauce” that
is “very hot” according to Galvan
Their full-service bar includes two specialty drinks — The Paloma which includes tequila and grapefruit
along with a special seasoning on the glass including soda, salt and lime juice. The other popular drink
is Cantarito, which includes four different citrus juices with the tequila. Those juices are lemon,
lime, orange and grapefruit. It also uses a Tajín seasoning.
“It’s very refreshing,” Galvan said. “It’s amazing how many people love it when they first try it.”
After learning of this story being prepared, one customer, Sue Donaldson, called the Sentinel office to
“put my two cents in.”
Donaldson said of the facility, “It was fabulous,” and the fresh shrimp soup, she said, “it was just like
you would get in Cancun.”
Galvan said the store had a soft opening near Thanksgiving and are planning a grand opening in January.

Hours are Monday through Thursday, from 11 a.m. to 9 p.m.; Fridays they stay open an hour later until 10
p.m. Saturdays and Sundays they open at noon and stay open until 10 p.m. on Saturday and 9 p.m. Sundays.

The restaurant employs a staff of 15, most of whom are full time. The entire menu is available for
take-out and they are developing an online order process.