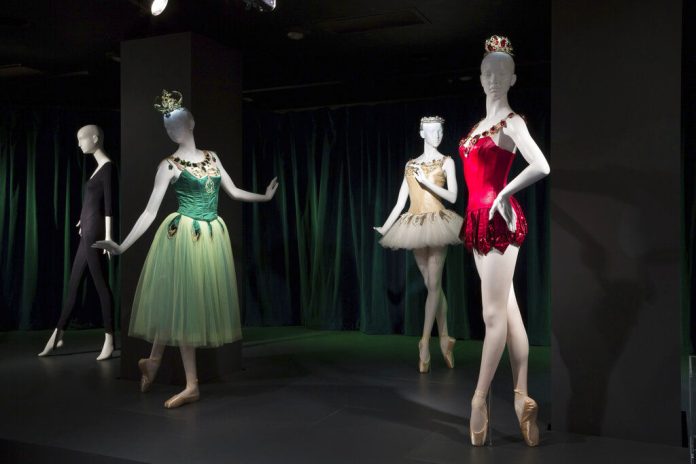 NEW YORK (AP) — A crowning jewel of the new exhibit at the Fashion Institute of Technology is a feathered
white tutu. It may look, to the untrained eye, like any ballet costume. It is, however, anything but.

Worn by the iconic Russian ballerina Anna Pavlova in her most famous role, the Dying Swan, the tutu
contains 1,537 feathers. Curators at the Museum at FIT know this because the feathers had to be counted
to get the tutu through the permit process to arrive in the United States, from Britain. At FIT, the
tutu resides in its own alarmed case with 37 screws keeping it safe and secure.
The launch this week of "Ballerina: Fashion’s Modern Muse" was timed to coincide with New York
Fashion Week, taking advantage of all the editors in town. But the connection is more than logistical:
The exhibit argues that ballet has had a major influence on fashion both high-end and casual, starting
in the early 20th century and up to the present time.
The exhibit features 90 items, including ballet costumes, couture gowns and athletic wear, or what we
today call "athleisure." Ballgowns or party dresses from top labels like Dior, Chanel and
Lanvin are displayed along with the ballet costumes that inspired them.
To Patricia Mears, curator of the exhibit and deputy director of the Museum at FIT, ballet’s influence is
"everywhere."
"So (if) you’re looking at a formal gown made out of silk tulle that is covered with spangles and
has a satin bodice, immediately you think of a ballerina’s tutu," Mears says. "If you look at
the flat ballet slipper, millions of women wear that kind of shoe today. And then the leotard, the
leggings … all these things have found their way into fashion. It’s ubiquitous."
While ballet’s popularity dipped somewhat at the end of the 20th century, Mears feels it’s gained
considerable ground over the past decade, partly due to the popularity of "Black Swan," the
2010 film that won Natalie Portman an Oscar, and partly due to the use of social media by dancers to
connect with audiences. Some dancers have become familiar cultural figures (none more than Misty
Copeland, for example, who has crossed over into mainstream stardom.)
And fashion has played a role in the phenomenon, argues Mears: "The collaboration between high-end
designers and ballet companies has been a really important force in making this change as well."

The most obvious example: New York City Ballet, which has contributed nine costumes to the exhibit,
including the late costume designer Karinska’s famous tutus from "Jewels" by George
Balanchine, and a 2012 costume for "Symphony in C" by current NYCB costume director Marc
Happel. The company’s annual fall fashion gala brings in noted designers to create costumes for new
ballets every year.
Also on loan from NYCB: the lovely long pink tutu worn by the Sugarplum Fairy in "The
Nutcracker" — a character that is "every little girl’s dream," says Happel. "She has
two costumes — she’s one of the only characters that does. This one is made of a very beautiful satin
bodice and several layers of tulle, which are different colors. That can be very subtle, but it creates
more depth in the classical tutu."
Echoes of that tutu, in fact, can be seen in a very modern item Happel has contributed to the exhibit:
the wedding dress he designed for Sara Mearns, NYCB’s star ballerina and a good friend, for her 2018
marriage, a stunning pink dress with spaghetti straps and a jewel-encrusted bodice.
In one section, the exhibit departs from the European high fashion elements — the Lanvin, the Chanel, the
Dior fashions inspired by ballet — to look a particularly American phenomenon of the 20th century:
activewear.
"I think one of the most surprising parts of the exhibit are the activewear elements," says
Mears, "the leotards, the leggings. Today, ‘athleisure’ is everywhere. But actually the phenomenon
started in the 1940s. and we have a whole group of American women designers like Claire McCardell to
thank for that. They were actually looking at dancers as a source of inspiration."
The exhibit runs through April 18.