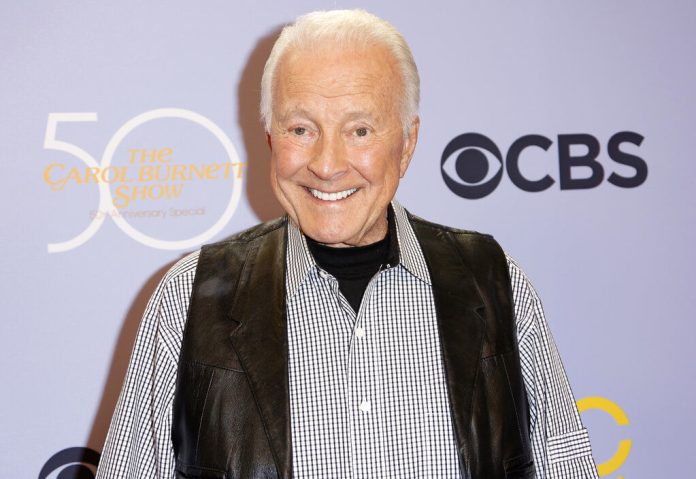 LOS ANGELES (AP) — Lyle Waggoner, who used his good looks to comic effect on "The Carol Burnett
Show," partnered with a superhero on "Wonder Woman" and was the first centerfold for
Playgirl magazine, died Tuesday. He was 84.
Waggoner, who was battling cancer, died peacefully Tuesday at his Los Angeles-area home with his wife of
60 years, Sharon, at his side, according to a family statement.
A household name in the 1970s, Waggoner went on to become a successful entrepreneur. He built a
behind-the-scenes business that provides custom trailers that keep stars comfortable during production
breaks. Playing on his surname, he called it Star Waggons.
In the mid-1960s, the Kansas-born Waggoner was appearing in run-of-the-mill movies such as "Swamp
Country" and "The Catalina Caper" and was a finalist to play "Batman" in the
campy TV series that eventually starred Adam West. Then he was called to audition for Burnett’s variety
show.
The actress-comedian recalled that she wanted an announcer for the show who could do more than introduce
the commercials. He had to also be good-looking, so she could do her ugly-duckling, romance-besotted
character with him, and funny, so he could contribute laughs.
"In walked Lyle Waggoner," she recalled in her 2010 book, "This Time Together."
"Gorgeous? Yes. But so much more. He was incredibly funny. He had a sly, tongue-in-cheek delivery
that told you he was putting himself on and not taking himself seriously."
As the series evolved, she said, he showed such great comic instincts that he got roles in sketches and
became a full member of the cast. He stayed with the show from its beginning in 1967 to 1974 (it ran on
CBS another four years.)
Along the way, he made history of sorts in 1973 when the fledgling Playgirl magazine chose him as his
first centerfold, calling him "the stuff of which sexual fantasies are made, a 6-foot-4 hunk of
gorgeous beefcake." The Chicago Tribune studied his unclothed but discreet pose behind a desk, and
reported he looked "slightly embarrassed at having it widely known that he sits at his desk in the
nude."
In 1976 Waggoner was picked to star in "Wonder Woman," based on the venerable comic book
heroine. Lynda Carter was Wonder Woman, who came from a lost island where she was one of a band of
Amazon women with superpowers. Maj. Steve Trevor (Waggoner), crashed onto the island during World War
II. Wonder Woman joined him on his return to the United States, where she mostly fought Nazi agents with
her secret powers while posing as Steve’s secretary.
In 1977 "Wonder Woman" moved from ABC to CBS as "The New Adventures of Wonder Woman"
and from the ’40s to contemporary times, with Carter still the superhero and Waggoner as Steve Trevor
Jr., his previous character’s son. The series ended in 1979 and Waggoner focused on his rental company,
with acting jobs on the side.
"I was always looking for a backup because I knew the (television) series; they don’t last
forever," he told a CNBC interviewer in 2002. "They can yank the rug out from under you at any
time."
He got the idea while working on "Wonder Woman," when he was assigned a motor home rented from
an individual. When Waggoner asked the studio if they would rent a motor home from him, he bought one
and started charging for it. That gave rise to Star Waggons, which were up to 40 feet long, cost as much
as $100,000 and included carpeting, leather easy chairs and satellite television.
He eventually had hundreds of them, customized to meet special requests. Star Waggons covered mirrors at
Steven Spielberg’s request, changed a dinette to a makeup area for Teri Hatcher and even switched a
trailer that Jaclyn Smith got "bad vibes" in. Martin Sheen, who played the president in
"The West Wing," and a real president, Bill Clinton, both used them; Clinton during a 1996
trip to California.
"I used to go on location and sit outside in a canvas chair with a fold-down counter as a makeup
station," Waggoner told The Associated Press in 1998. "Now we have these 40-foot,
eight-station electronic slide-out rooms with surround sound and CD players." "Our job is to
spoil the actors."
Waggoner continued to perform occasionally, appearing in TV specials starring old pal Burnett and guest
starring on shows such as "Murder, She Wrote," "Ellen" and "Love Boat."

Waggoner, who was born in April 1935, is survived by his wife, their two sons, Jason and Beau, and four
grandchildren. Services were pending for Los Angeles and Wyoming, the family said.
__
This story includes research from the late Bob Thomas, who was a longtime Hollywood reporter for The
Associated Press.