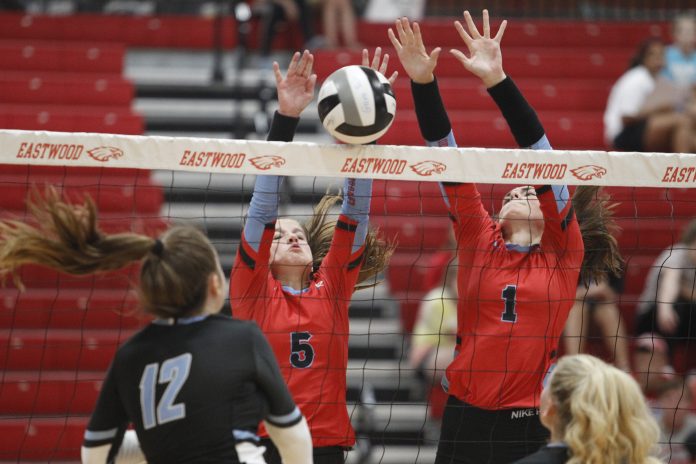 PEMBERVILLE — One of two unbeaten teams in the Northern Buckeye Conference, Lake was in danger of falling
behind two sets to one on Tuesday.
The Flyers had led for just one point deep into the third set against one-loss Eastwood.
But the Eagles illegally crossed the net on a kill attempt to give Lake a 23-22 lead before freshman
Skyler Foster hammered a kill through Eastwood’s block attempt to give the Flyers four straight points
to claim the third set and eventually the match with a 26-28, 25-23, 25-22, 12-25, 15-7 NBC win.
“It was huge. And when we were down in the fourth, I don’t think they quit, but knowing that there’s
still a fifth, that they had that third (set) was ginormous,” Lake head coach Amy Vorst said.
Lake stayed perfect in the conference improving to 9-1 overall and 5-0 in the NBC. The Eagles, whose
other loss came to NBC unbeaten Otsego in five sets, fell to 6-3 and 3-2 in the league.
The Flyers disappeared in the fourth set.
After two straight set wins to take a 2-1 lead, Eastwood never trailed in the fourth set. Eagles senior
Alyssa Hoodlebrink (12 kills) and freshman Morgan McMillin continuously spiked the ball through the
block attempts of Lake to continue racking up points.
Four of Eastwood’s five kills in turning a 14-9 lead into an 18-10 lead were from the hands of
Hoodlebrink and McMillin.
The Eagles added six aces in the set, including a set-clinching ace by captain Anna Ramlow — who led with
18 digs — for a 25-12 win.
“We try to be an aggressive serving team, but we have fallen short in the last couple matches. We feel
getting it over the net is good enough. It’s not at the varsity level. We lit it up on the service line,
that is completely what won that fourth set,” Eastwood head coach Jeff Beck said.
“The competitive edge. I felt we competed in set four, and that’s who we are,” Eastwood assistant coach
Jamie Babcock added. “We’re a really good volleyball team. And that competitive edge left us in set
five.”
As Lake did in the third set, it showed an elite level of resiliency again.
Despite fumbling the fourth set, the Flyers soared to a quick 9-0 lead in the fifth set. Eastwood did not
have an answer for sophomore Cassidy Wiley.
After a pair of errors on Eastwood to give Lake an immediate 2-0 lead, Wiley combined with Taylor Asman
for a team-igniting block and a 3-0 lead. She kept rolling with two tap kills, another through the block
attempt of Eastwood and capped the 9-0 run with a solo block tapped over the net.
“Cass Wiley was on fire in that set,” Vorst said. “She just kept going in, she got a big block, it was
huge. She owned that fifth set.
Wiley, who matched Kortney Ellison with a team-high 15 kills, added two more kills in the final set. Ella
Vorst, a freshman, blasted a knuckling ball through the middle of the floor for her 11th kill and the
final kill of the match. Karly Bekier led with 47 assists.
“So impressed with their composure,” coach Vorst said. “They had their backs against the wall. I’m very
proud of their composure and their willingness to keep fighting.
“We knew Eastwood was going to be good. Eastwood’s always good. We know that Otsego’s hungry for us too.”

The Knights, at 4-0, are the only other unbeaten in the NBC. Eastwood hosts Otsego next Thursday at 7
p.m.
The Eagles, notoriously one of the toughest teams in the NBC winning the league title five times since
2011, is missing a key piece that they’ve had in the past.
“We just have issues on our team with the fact that we’re looking for that person. We’re looking for that
athlete that’s going to put the team on their back and say give me the ball,” Beck said. “We don’t have
a competitive spark right now with any of our players. We’re going to be trying hard to help them get
that. We’ve had them in the past here at Eastwood, I don’t know what it is. We need somebody to say
here, now, give me the ball and we don’t have that.
“Our three losses have been five sets. We’re right there, we’re close. And I don’t think youth is the
reason why we don’t have that go-to player, but we are young. Many of these girls were on the JV team
last year. But we expect varsity level play when you’re on varsity and that has to change.”
Hoodlebrink and captain Carlee Lepiarz (45 assists, 12 digs, three aces) are the only two seniors on the
roster.
Brenna Moenter, a sophomore, led Eastwood with 16 kills and junior Sheridan Schuerman’s 20 digs were a
team-high.