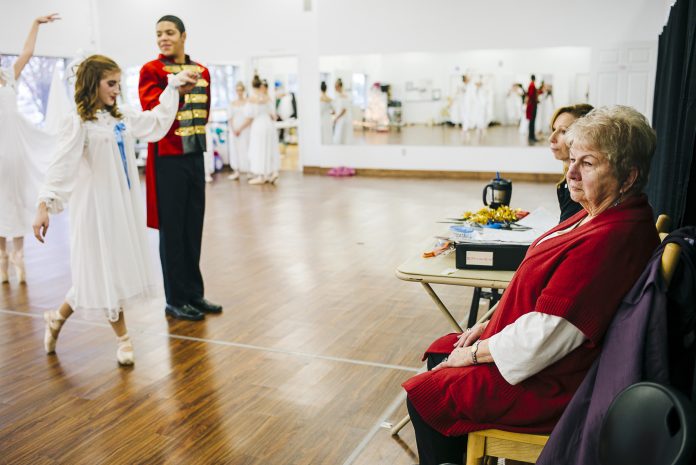 Dolores Black grew up as a dancer in a different era.
When she started taking dance lessons about 75 years ago in Detroit, her mother dropped her off and she
was then in the charge of her teacher.
The teacher had a cane, and the students would bow to him. They learned early to get themselves dressed.

“It was the European way,” Black recalled in a recent interview.
After a life dedicated to teaching and the arts, Black is lending her talents and passing on a sense of
that tradition to a new corps of young dancers.
She works with Julie Setzer at Julie’s Dance Studio. The troupe is now preparing its annual “The
Nutcracker Ballet … All Jazzed Up,” which will be performed Saturday at 2 and 7 p.m. and Sunday at 2
p.m. in Kobacker Hall in Bowling Green State University’s Moore Musical Arts Center. Contact
www.juliesdancestudio.com for ticket information.
Black, 81, aspired to be a ballerina, but by age 15 was deemed not to have the right body type. Instead
she became a teacher in health, physical education and English. She’s taught students from kindergarten
through college.
When she was a child dance was considered an integral part of education, included in physical education.
Coaches saw the value of having their athletes exposed to the physical discipline of dance.
When she first taught at BGSU in 1955, she had a class of musical theater majors that included future
comedy star Tim Conway.
Despite the energy and high spirits, she said, “they respected to me.”
But as soon as there was a class break “it was like a Broadway comedy,” Black remembers.
She left the university and taught in local schools for a number of years. She remembered at Otsego a
group of boys asked for her help learning the fox trot and waltz to prepare for the prom. The lessons
had to be at night and off school property lest the male students open themselves to teasing from their
peers.
In 1963, Black returned to BGSU to teach in the School of Education and Human Development, where she
stayed until her retirement in 1993.
Early in that tenure she led the university dance troupe Orchesis.
Black met Setzer when she stopped by her studio to check out what was happening.
She liked what she saw and was impressed with Setzer. “She’s a diamond,” Black said.
Setzer combines a multitude of talents — teacher, choreographer, designer, entrepreneur.
“We sort of bonded together,” Black said. “She listens to you. She respects you.”
Black brings long experience in dance. She’s seen multiple Nutcrackers including one by the Bolshoi
Ballet.
She brings that tradition to the production.
The lessons of dance carry over to life and school, Black said. Sometimes, she said, “the kids don’t
focus and they have to learn to.”
She’s impressed with what she sees at Julie’s, especially some of the older dancers.
Members of the community need to appreciate the value of dance education provided by Julie’s and The
Beat, another dance studio in Bowling Green, she said. “They need to support this.”
Attending this weekend’s “Nutcracker” production may be a good way to start.