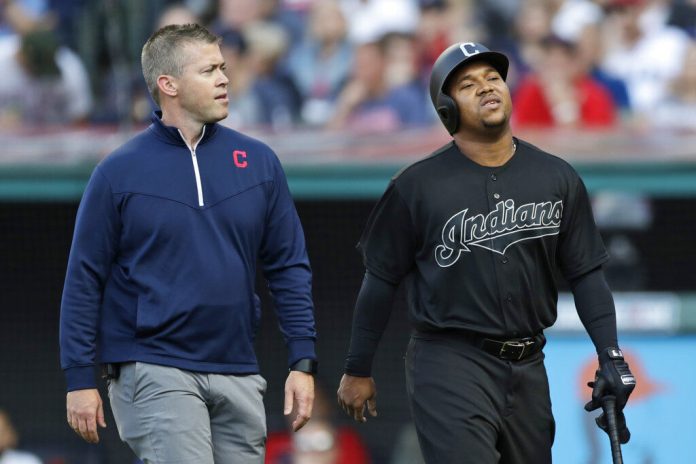 CLEVELAND (AP) — The Cleveland Indians have been dealt a major blow at the worst time possible.
Third baseman José Ramírez, who has been on a hitting tear after a slow start, has a broken right hand
and will be sidelined indefinitely as Cleveland tries to catch Minnesota in the AL Central or capture an
AL wild-card berth.
Ramírez was placed on the injured list Sunday with a fractured hamate bone, an injury that typically
takes over a month to heal. He was removed from Saturday’s game in the first inning after swinging at a
pitch, and manager Terry Francona said he’s been dealing with soreness in his wrist for some time.
Cleveland entered Sunday’s series finale trailing the Twins by 2½ games in the division and one-half game
back in the wild-card race.
The 26-year-old Ramírez started slowly this season, but he has been playing like a two-time All-Star
again and has been one of the Indians’ best hitters. He is batting .254 with 33 doubles, 20 home runs
and 75 RBIs in 126 games. He entered Sunday second in MLB in extra-base hits (32) and third in RBIs (40)
in the second half.
The Indians have been dealing with obstacles all season. Two-time Cy Young winner Corey Kluber has been
out since May 1 with a broken arm, and starter Carlos Carrasco is being treated following a leukemia
diagnosis.
Utilityman Mike Freeman could get the bulk of playing time at third while Ramírez is out. He replaced
Ramírez in Saturday’s game and had two hits and drove in a run as the Indians beat the Kansas City
Royals 4-2.
___
More AP MLB: https://apnews.com/MLB and https://twitter.com/AP_Sports