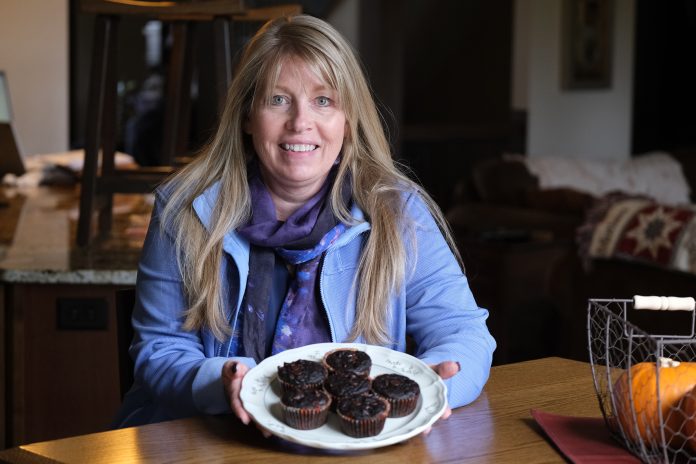 Julie DiBartolomeo has zucchini bursting out of her Bowling Green garden almost everyday this time of
year.
“I seem to have an abundance of zucchini every year, so we’re always trying to find interesting things to
do with zucchini,” she said. “Zucchini’s kind of like cats — you just can’t give it away.”
One of her go-to zucchini recipes is Chocolate, Chocolate Chip Zucchini Muffins. The double chocolate
reference is correct — you’ll see when you taste them.
“It’s a combination of a zucchini bread recipe that I had and then I modified it to make it chocolate
with chocolate chips because my husband is everything chocolate — the more chocolate the better,” she
said.
They are a favorite among her friends and husband Don’s colleagues. He manages a Perrysburg bicycle
store.
“Every time I make them, they’re gone in two days,” she said. “That is the fan favorite — that and
meatballs. There’s two recipes that everyone’s always like, ‘when are you going to make the zucchini
muffins and when are you going to make the meatballs?’
“We were talking about it on a bike ride, and everybody has zucchinis this time of year and they’re all
trying to figure out what to do with it.”
She lets the zucchini surprise people. DiBartolomeo said she’ll mention the vegetable after they take the
first moist, chocolate-y bite.
“Sometimes they don’t want to taste them when they know they have zucchini in them,” she said.
She also makes zucchini bread and zucchini noodles, drizzled with a garlic butter or Garlic Expressions.

DiBartolomeo tried zucchini chips, but said they turned out mushy.
“You have to press them, like you do with tofu to get the moisture out of them, and I didn’t get enough
of the moisture out.”
When making the muffins, DiBartolomeo said don’t forget to leave some chocolate chips to sprinkle on top.

She said the recipe is easy to make. Interestingly, she said, it doesn’t have white sugar.
“A typical zucchini bread has white sugar in it, but this one, we wanted a more moist and rich flavor, so
we just did brown sugar and no white sugar,” DiBartolomeo said. “And it’s got two cups of zucchini in
it, but you’d never know it.
“And you can’t see it. With a traditional zucchini bread, you’re going to see the green zucchini in it,
which puts people off sometimes. But with this, you don’t see the zucchini and you really don’t taste
it. It just adds a really nice density and moisture to the muffin.”
The recipe was originally for a loaf.
“But, because we would share it, I modified it to make it into muffins because they’re more shareable.”

In the garden, she also grows tomatoes, peas, spinach, jalapenos, green peppers and honey-nut and
butternut squash. Asparagus has been a huge success that took a lot of patience.
“That took me six years, because you have to grow it for three years before you can harvest it. Then it
comes back every year,” DiBartolomeo said.
The family does eat out quite a bit, she said, although she cooks four-five times a week.
“I try to use the stuff from the garden a lot.”
She and Don have three daughters between them. One is a nurse in San Diego, one is in Bowling Green and
the third attends Kent State.
They’ve lived in their Bowling Green home for eight years.
The home caught on fire in December when the couple was at the grocery store. DiBartolomeo said,
thankfully, her daughter was at home. She called the fire department, then DiBartolomeo, after she
smelled smoke.
The fire was in DiBartolomeo’s craft room, on the second floor.
“By the time we got here — we just left our groceries and ran out of the store and got back here in 15
minutes — they had the fire out. It was just one little electrical outlet,” she said.
“But the smoke went everywhere.”
Coronavirus stalled the repairs.
“We just finally, last month, got the carpeting replaced. We’re pretty much back to what it was like
before the fire.”
She improved on the craft room, getting a custom table and cabinets for her stained-glass work.
“I don’t recommend a fire to anyone, but it’s better than it was before,” she said of her craft room.
DiBartolomeo has an Etsy store but mainly makes her work for the non-profit group, the Right Direction, a
youth development program. They teach skateboard, bike and scooter skills at area parks.
Don brings home old bike gears, which she fits with stained glass, and they sell.
“Most of it’s, honestly, word of mouth,” she said of the sales. “People who are in the cycling community,
the bike community, it’s a unique gift.”
DiBartolomeo, who works for Speedway in human resources, is a Toledo native and University of Toledo
graduate.