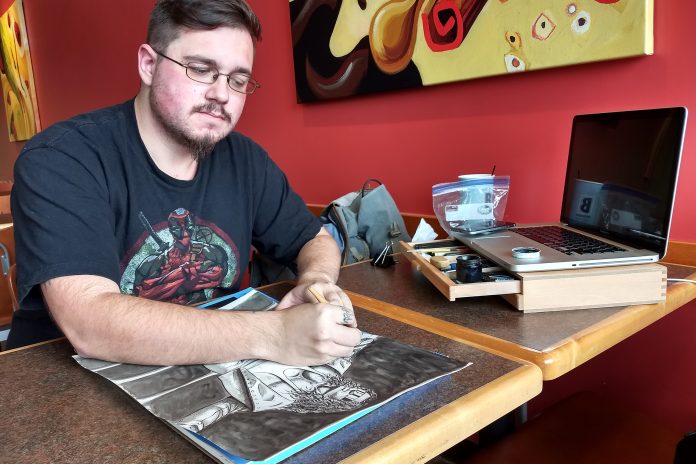 Creativity and a career have flowed from the tip of a pen for Tyler Wolleson despite — and because of — a
disability that caused difficulties with traditional schooling.
“I want people to know that individuals with a disability like mine can have a career,” Wolleson said.

Wolleson was identified in middle school as having Asperger syndrome, which is part of the complex group
of neurodevelopmental disorders known as autism spectrum disorders.
Wolleson can be found at coffee shops around town with his laptop, inks and a small easel. His favorite
is Biggby.
“Because of the friendly staff, but also for the light,” Wolleson said. “It’s nice to get away from the
studio.”
Mad World Images, Wolleson’s creative art business, started out as a father and son project. His father
was also an artist and wanted to pass that on to Tyler, and it was a skillset that was a natural for
them both.
Wolleson had a difficult time in school, but teachers saw him drawing in class and they pushed him to
develop his natural talent. He did spend some time taking regular college classes, but he felt that he
didn’t fit in.
“My father had to fight with the school system. If it hadn’t been for my mother and father, I wouldn’t be
where I am,” Wolleson said.
He has a little formal training. He took a few classes in graphic arts at the University of Northwestern
Ohio, but he’s mostly self-taught.
“A lot of schools back then didn’t understand it. It was rough,” Wolleson said. “There are a lot of kids
with disabilities that are great artists that don’t get recognition. I see people with disabilities as a
gift from God.”
Some in the local classic car and hot rod scene may remember Tyler’s dad, Eric.
“I grew up with a father who loved ‘50s and ‘60s culture. I watched him do Rat Fink art. He taught me,”
Wolleson said. “I grew up with motorcycles. My dad was a biker kind of guy. I grew up with a lot of
biker kind of people, so over the years I watched a lot of biker kind of shows on TV, like ‘American
Choppers’ and documentaries of Jesse James, like ‘West Coast Choppers.’”
He describes his style as manga, or anime, mixed with Rat Fink, an old school automotive style of cartoon
character that is still popular with the classic car and hot rod crowd.
“I started out as a 5-year-old, as soon as I touched pencil and paper, with Hot Wheels cars in front of
the TV with a notebook or sketch pad,” Wolleson said. “I learned watching Chip Foose on the Discovery
Channel.”
He’s steering away from cars right now, but that’s still a foundational part of his business. He likes to
design cars from scratch and it’s good for the custom hot rod designers to employ him.
“Project renderings, body work, paint jobs, wheels — the designer needs to see a rendering before
chopping the actual vehicle up. It’s a good idea to see what the vehicle may look like,” Wolleson said.

Right now he’s honing his own style of celebrity cartoon portraits. He’s careful to point out that they
are not caricatures, but more like a comic book style. The piece on the easel was of a popular 1990s era
professional wrestler, Bret “The Hitman” Hart.
Wolleson, who is 27, is doing his art full time. This time of the year is particularly busy. Commissioned
pieces as gifts take up all of his time. Most of his business finds him through Facebook or YouTube.
Thanks to the internet there is a growing corner of his business made up of anime cartoon characters.
“I turn the person into an Anime character,” Wolleson said.
He thinks it may be an outgrowth of cosplay, where comic book fans dress up as favorite characters while
attending comic book conventions, like the Comic-Con in San Diego.
For several years he was using mostly Prisma brand colored pencils, which he says are a wax based pencil
that allows for smooth blending. It worked well for what he calls “rustic drawings,” but it didn’t work
well for the car illustrations. Most of his work today is with a combination of pens and a variety of
inks, which he then combines with computer graphic design. Along the way there is a sketchbook or canvas
of the art, at least in progress, in sizes that range from 8 ½ by 11 inches up to 18 by 24 inches.
“It’s a total experience, with a lot of experimenting,” Wolleson said about his creative process, which
allows him to be intensely immersed in a project.
That is what he might be seen with at the coffee shops, if his easel is out. The little jars are a
variety of watered down ink, which he often experiments with.